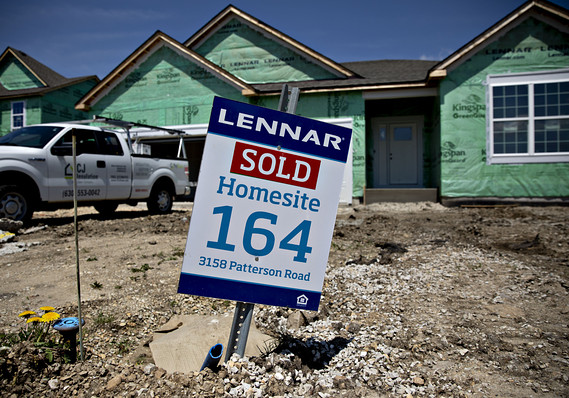 A “Sold” sign is displayed outside a home under construction in Illinois. Housing starts fell in September a month after hitting a 12-year high.

The numbers: Construction on U.S. new houses fell more than 9% in September, but a recent surge in permits suggests the decline in so-called housing starts is just a temporary pause in a real estate market reinvigorated by lower mortgage rates.

Housing starts slid to an annual rate of 1.26 million las month from a revised 1.39 million in August, the government said Thursday.

The slowdown was concentrated in new buildings with five units or more that typically get rented.

Economists polled by MarketWatch had expected starts to decline to 1.32 million following a surprising strong gain in the prior month. In August, housing starts hit a 12-year high.

Permits to build new houses, meanwhile, fell about 3% to a 1.39 million annual pace. The number of permits filed was nearly 8% higher compared to a year earlier, however.

What happened: Work on new houses slowed in all four regions, with the Northeast and Midwest experiencing the biggest declines.

Construction of apartments, condo complexes and other projects with five units or more sank 28% in September. That type of new construction can swing sharply from month to month.

New construction on single-family homes actually rose slightly to an annual rate of 918,000, marking the highest level since the start of 2019. Single-family starts are 2.8% higher compared to a year ago.

About three-quarters of all U.S. homes are single-family dwellings.

Big picture: Construction has perked up following a steep decline in interest rates. A 30-year fixed mortgage, for example, has tumbled to as low as 3.5% from more than 5% a year earlier.

Read: Home builders haven’t been this optimistic since early 2018 and here’s why

Builders still aren’t producing enough new houses to satisfy demand, however, and they are unlikely to dramatically scale up construction in light of fresh worries about the health of the U.S. economy. That’s keeping home prices higher than they otherwise would be and effectively capping overall sales.

The 10-year Treasury yield TMUBMUSD10Y, +0.85% was little changed at 1.76%. The yield has fallen about 45% in the past year, tugging mortgage rates down at the same time. Many loans are tied to changes in the 10-year note.