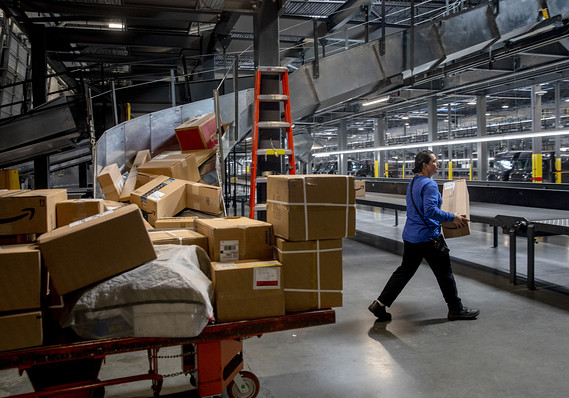 A worker carries a package to a conveyor belt at the United Parcel Service Inc. The service sector has so far been immune to weakness in manufacturing.

The outlook: The U.S. economy seem to be slowing a bit, only expanded at “a slight to modest pace” since early September, according to the Federal Reserve’s Beige Book. The report, basically a summary of anecdotes collected by the central bank from its business contacts across the country, was slightly weaker than the previous report for the summer. Business activity varied across the country, with Midwest and Great Plains report more downbeat than the southern and western regions. The early impact of the strike at General Motors was seen as limited.

What happened: The trade war continued to affect business activity. Manufacturers were starting to layoff workers in a number of districts because orders were soft. But other firms said they wanted to retain scarce workers and so are cutting hours not jobs.

In general, slower but continued growth was the forecast.

“Business contacts mostly expect the economic expansion to continue; however, many lowered their outlooks for growth in the coming 6 to 12 months,” the report said.

Big picture: The looming question hanging over the economic outlook is whether the weakness in business confidence seeps into the consumer sector. There was no hard evidence of this contagion in the report, as household spending was reported as “solid” on balance. But if layoffs spread outside the manufacturing sector, that might change.

Economists are divided about whether the Fed will take out more insurance with another interest rate cut at the end of the month. After a relatively weak September retail sales report released earlier Wednesday, investors are pricing in an 85% probability of another quarter-point rate cut when the central bank meets in two weeks. The Fed has already cut rates twice at its last two meetings. The decision about another cut is seen as a closer call by Fed watchers, who note that many central bankers have called for a pause on further rate cuts to see how the economy fares following the two easing steps.

• GM suppliers were using the strike to build up their inventories, according to the Chicago Fed.

• Barge traffic in the Arkansas and Mississippi rivers continued to recover from the slowdowns caused by months of high water conditions earlier in the year, the St. Louis Fed said.

• There were some signs of softness in hiring in the Minneapolis District.

• U.S. corn and soybean production was expected to decline slightly this year, but not enough to materially reduce large outstanding supplies, the Kansas City Fed said.

• The attacks on Saudi Arabian oil facilities did not change capital spending expectations in the oil and gas sector. It was take a lasting increase in the price of oil to influence those plans, the Dallas Fed said.

• In the Atlanta region, several contacts impacted by tariffs were able to pass along price increases.

• A furniture maker in the Richmond district said the trade war would lead to job losses if not resolved.

• A few manufacturers in Cleveland said that their customers had let inventories get too low in anticipation of a more significant manufacturing slowdown than has materialized.

• In Philadelphia, a large nonfinancial services firm noted continued improvement in the already low delinquent accounts receivables of its consumer base and said this trend was seen across the country.

• One major chain in New York said that tariffs were raising costs for home goods but consumers were resistant to price increases.