Home
Stocks
Paul Brandus: Trump continues to hoodwink his base on the economy
Prev Article Next Article 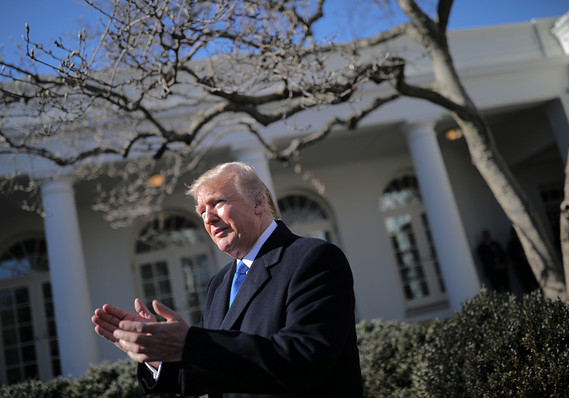 What’s there to clap about?

Meanwhile, to ease the pain for American farmers hurt by his trade war (not just those who grow soybeans), Trump has showered them with billions of dollars, much of that money borrowed from—guess who—China.

Wow! Overseeing a 77% market collapse, followed by a multi-billion dollar bailout using money borrowed from China, to help farmers who once sold to China before being shut out by China. What a deal.

You know what else isn’t real? Just about everything Trump has said about how he’d be great for the U.S. economy.

Let’s start with one important metric: Wage growth. This has increased, on an inflation-adjusted basis, during Trump’s time in office, and he says it’s all because if him. What he doesn’t want you to know is that wages, in real terms, bottomed out in the mid-1990s and have been gradually rising since. Even so wages—again adjusted for inflation—remain far below their peak, which occurred nearly half-a-century ago.

Trump says our economy is “perhaps the greatest economy we’ve had in the history of our country.” What he doesn’t want you to know is that it has never even grown as fast as it did, on occasion, during the Obama years. Trump has never had a quarter with 4% growth for example, while Obama had four (non-consecutive) quarters over 4%, plus two that topped 5%.

Yet even with that claim easily shattered, Trump says the U.S. economy is the “envy of the world.”

And this is all despite the massive tax cut he promised would change everything. It only changed one thing: It has returned us to the land of trillion-dollar deficits. But the investment boom Trump promised is nowhere to be found, and one reason for this is because of the trade wars he started with the rest of the world. The uncertainty and havoc he created caused company after company to take the tax cuts and not invest in plant and equipment like he said (some raise dividends for shareholders or lavished ever-bigger bonuses on executives, though). Trump gave companies incentive, and capital, to expand—then took it right back with his trade wars.

Trump says that thanks to him, the U.S has become a jobs machine. Oh? Then how to explain that job growth has slowed since he took office? Data provided by the Bureau of Labor Statistics shows that during Trump’s first 32 months on the job (February 2017 through September 2019), 5.53 million jobs were added to the economy. As Obama was leaving, his last 32 months (June 2014 to January 2017) showed 6.97 million jobs were created—nearly 21% more than Trump. Here, see for yourself:

Speaking of jobs, here’s something that will really drive Trump and his believers crazy: far more jobs were created per month on Jimmy Carter’s watch than so far, on Trump’s. Trump’s first 32 months have averaged nearly 173,000 jobs while Carter’s 48 months averaged 204,000. Even with a U.S. population about 40% bigger, Trump doesn’t come anywhere near Carter. Sad!

Trump keeps saying China is paying for the tariffs. What he won’t tell you is that the cost has fallen “entirely” on U.S. businesses and households—at least that’s what investment banking giant Goldman Sachs says. That’s on top of a similar JPMorgan Chase study that said the cost to the average American household could be an extra $1,000 next year, as Trump runs for re-election. It’s unclear as I write this how Friday’s “phase one” trade deal with Beijing will affect these and other analyses.

Maybe the president should walk down the hall and talk to his chief economic advisor, Larry Kudlow—who has contradicted his boss on this. Speaking the truth? In the Trump White House? Shocking, and that’s why I predict this future news headline: “Kudlow Out at White House.”

Speaking of who’s paying for what, even Trump’s base has probably figured out by now that he was lying about Mexico paying for the wall. What Trump doesn’t want them (or anyone) to know is that he’s beefing up a portion of it by taking money away from military families instead—hurting our brave men and women in uniform, their children, and overall military readiness. See for yourself.

If I had more room, I could give more examples of how the president has hoodwinked his base—on economics, foreign policy and more. I wish they would understand that when it comes to manufacturing and distributing what he likes to call “fake news,” Donald Trump reigns supreme.