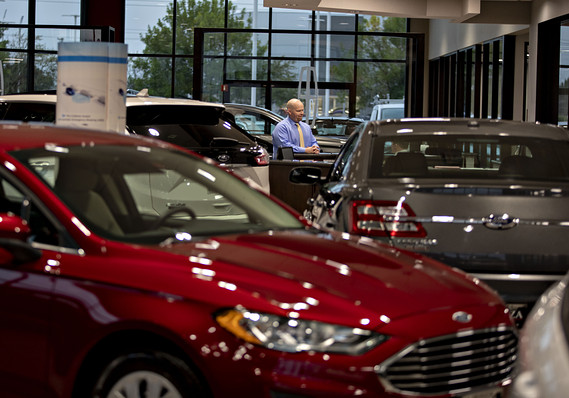 Auto dealers sold a lot of new cars in September, but broad discounts led to lower receipts. That contributed to the first decline in U.S. retail sales in seven months.

The numbers: Sales at U.S. retailers fell in September for the first time in seven months as most stores posted lower receipts, signaling that a widely expected slowdown in consumer spending is underway.

Retail sales fell 0.3% last month, the government said Thursday, ending a streak of six straight strong gains that helped to fuel economic growth in the middle of the year.

Retail sales were flat if gasoline and auto dealer receipts are excluded, but the overall report was still quite weak.

Partly mitigating the soft September report: Retail sales in August were revised to show a 0.6% increase vs. an initial 0.4% estimate.

What happened: Sales fell almost 1% at auto dealers even though they reported a strong increase in the number of new vehicles sold. The dropoff likely reflects heavy discounting or more corporate-fleet sales.

The softness was widespread, however. Sales also fell at home centers, department stores and Internet retailers.

The only segment of the retail industry to record strong sales were health stores and pharmacies.

What might have contributed to weaker sales is the month-long strike at General Motors that has idled tens of thousands of workers in several large Midwestern states including Michigan and Ohio.

Big picture: Household spending is keeping the wheels of the U.S. economy turning even as many countries around the world confront slower growth, but torrid consumer spending during the spring and summer was unlikely to persist.

The big question is how much consumer spending wanes, especially with businesses largely sitting on the sidelines. The trade war between the U.S. and China has disrupted global supply chains, upset business-investment plans and caused executives to hunker down until the dispute is resolved.

So long as consumers do their part, the U.S. is likely to avoid recession. The Federal Reserve’s decision to cut interest rates also appears to have given parts of the economy like the housing industry a boost.

Market reaction: The Dow Jones Industrial Average DJIA, +0.89% and S&P 500 SPX, +1.00% were set to open lower in Wednesday trades. Stocks have been rising recently on hopes of a U.S.-China trade deal, but doubts linger.