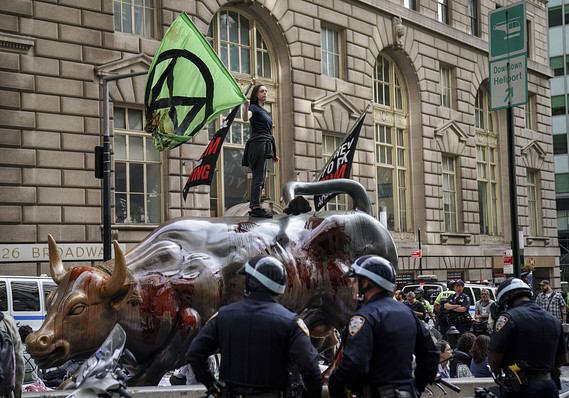 Environmental activists rally for action against climate change around the Wall Street bull in October.

Protestors threw blood at Wall Street’s “Charging Bull” statue in October as a public display of their anger at wealthy investors who demonstrators believe are exasperating the global climate crisis. Perhaps unknown to protestors seeing red not green is the growing demand from Wall Street for bonds and other assets that promise to promote sustainability.

Globally there’s been a significant spike in green-labeled bonds, which jumped from $78 billion in total value in August 2015 to $590 billion in August 2019, even as it remains difficult to measure green bonds against one another, according to a report released last week by the International Monetary Fund.

For many investors, the “bragging rights” that might come with a sustainable portfolio, or in simply bringing asset diversification to a traditional portfolio, may be enough to satisfy their goals. The IMF’s research showed “no conclusive evidence in the literature that sustainable funds consistently out[perform] or underperform conventional funds.” 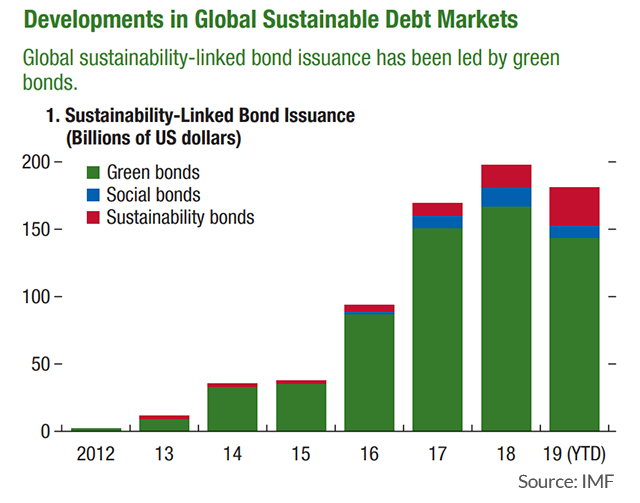 Bragging rights and uncertain returns aside though, how can investors be assured that the good intentions of a green-bond issuer will be delivered?

There is no standard way to compare a bond’s green claim, the IMF report shows. And these nonstandard investments risk feeding the phenomenon known as “greenwashing,” whereby a company claims to be more environmentally conscientious than its operations allow. There are no set regulations that dictate the fiduciary responsibility unique to green investing, nor rules that require companies or government entities (Singapore is a green bond issuer for one) to quantify their climate exposure.

To solve this investing dilemma there needs to be more standardization, said Evan Papageorgiou, an author of the research report, and deputy division chief in the monetary and capital markets department of the IMF. That includes for green-focused investments and all assets within the category’s more typical ESG label, referring to environmental, social and governance. 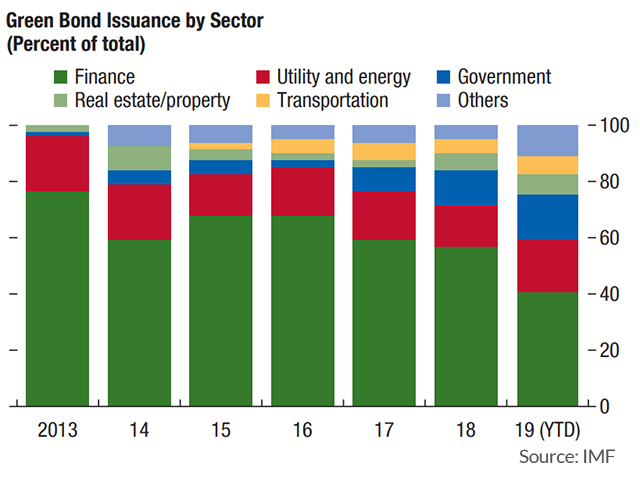 For instance, PepsiCo Inc. PEP, -0.06% recently issued $1 billion in green bonds. Pepsi distinguishes these green bonds from its traditional bonds by pledging to use the proceeds to help cut single-use plastic products and replenish the water it consumes in making soda and snacks.

Like other companies, the Pepsi pledge is simply its own claim, although one formalized in the bond’s prospectus and in sales pitches to sophisticated fund and pension investors. Pepsi’s reputation as a routine bond issuer can help investors form an opinion on its green offering, as can its work as a major corporate signatory in some global green initiatives. Credit quality, another major determining factor for bond investors who are weighing risk against reward, has become more diverse for green bonds, but most green offerings are highly rated, with a small fraction below investment grade, the IMF data shows.

Read: Why are green housing bonds not getting more love from ESG investors?

Even if credit-quality confidence is secure and investors have weighed fee differences (the IMF report found that fees of sustainable actively managed funds are often higher than other active funds), investors are simply trusting that the bonds deliver on the green pledge as promised.

Papageorgiou is optimistic that European Union efforts to address these concerns by developing standards for companies looking to issue green bonds “may create more momentum for a global standard.”

“If the private sector takes to it, standardization can go a long way in reducing greenwashing,” he said.

The IMF, which considers climate-change factors in assessing economic conditions, does not have its own set of standards for green bonds. “We are not a regulator, we do not set any investment standards,” Papageorgiou explained. “The IMF is a trusted adviser of member countries and we believe standards can help the private and public sectors.”

One non-profit organization, the Climate Bonds Initiative, has attempted to develop a set of international standards for green bonds. Climate Bonds grants companies green bond status if it finds that the “investment product is aligned to the Paris Agreement goals and the bond proceeds will be managed appropriately,” as stated on their site.

However, a company can still issue a so-called green bond whether or not it satisfies Climate Bonds’ standards.