For investors, it could be a costly mistake to be on the wrong side of that debate if Netflix’s stock price marches toward a record $419. Last month it drifted to a 2019 low of $255 after the company reported disappointing second-quarter subscriber numbers in July. The Los Gatos, Calif.-based company releases highly anticipated third-quarter results Oct. 16.

Investors are on edge with over-the-top (OTT) stocks, with whipsaw reactions to news of any kind that a new entrant has emerged. (An OTT media service offers TV shows and movies directly to viewers via the internet.) And with more than 190 OTT providers in the U.S., there are plenty to keep track of. These days, competition is becoming a daily threat. We’ve seen new services by Apple AAPL, +2.66%, NBCUniversal and Disney DIS, +0.53%  challenge investors’ conviction on Netflix.

Second-quarter earnings results added to the debate, as Netflix said the net number of subscribers declined in its home market for the first time. The company also reported fewer-than-expected new international subscribers. Never mind the fact that Netflix is the top streaming service by a wide margin, with 87% of OTT households in the U.S. subscribing to the service.

The OTT growth opportunity is global. Cable companies are primarily holding on to subscribers with live sports and news, suggesting there’s an opportunity for OTT live content. For subscription video on demand (SVOD) content, such as Netflix’s, the domestic market is mature — the company has 60.1 million subscribers, compared with 128 million households. What remains is global.

The international opportunity is clearly indicated in earnings and subscriber growth, and Netflix is primarily in the red with free cash flow due to producing content for various regions. However, the market is myopic with this particular stock, overlooking the simple facts around broadband penetration rates and the lack of viable competitors on a global scale. 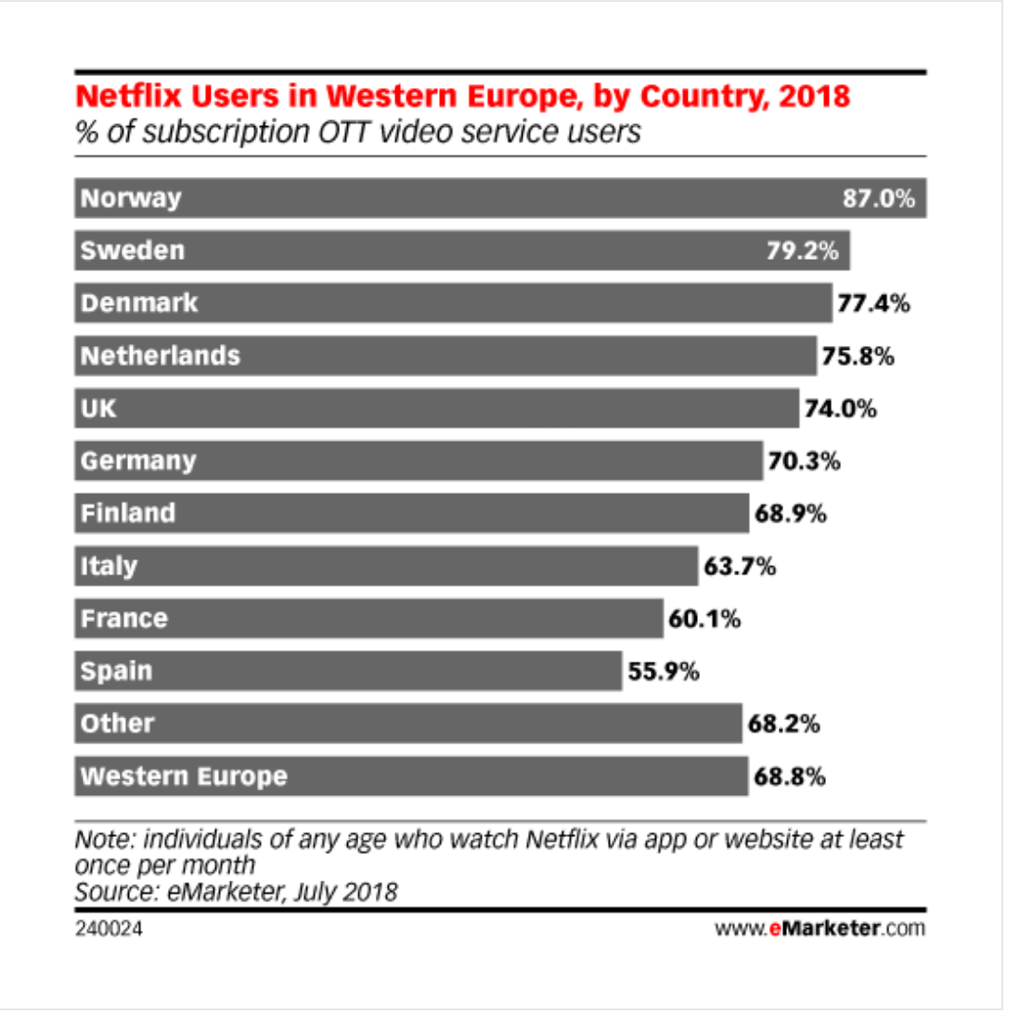 Asia-Pacific offers growth opportunities as the OTT market is complicated for rivals, yet early in the maturation phase. Some challenges are outside of Netflix’s control, such as in India, where only 1% of the population watches Netflix due to the cost of the service and low broadband speeds. In that country, where 61% of Indians watch pirated content, an ad-supported service is more likely to succeed than a subscription service.

As Asia’s population represents the majority of the world’s, gains of 2%-3% can be more impactful than double-digit increases in North America. According to eMarketer, Netflix’s penetration of Asia-Pacific will advance from 11.8% in 2018 to 14.3% in 2020.

Regions such as China have high barriers to entry for stand-alone services, yet Netflix has secured a promising licensing deal with iQiyi IQ, +4.77%, which is owned by Baidu BIDU, +0.78%. Netflix’s share in Japan remains at 17%, despite launching in 2015, as the country has an older population that is averse to new technologies.

International markets such as Central and Eastern Europe, the Middle East and Africa have upside for acquired titles, an area of strength for Netflix.

If Netflix continues to dominate globally, then the company could be serving 50%-70% of developed countries and 20% of the developing world. With the limitations of broadcast and linear television, it’s unprecedented to have a truly global media company. We will see the full effects of this long after the United States is saturated.

The OTT market in the U.S. took a decade to surpass pay TV, with Hulu launching in 2007, popular set-top boxes starting circa 2008 and Netflix’s streaming service beginning in 2010. (Netflix was founded in 1997 as a DVD-rental service.) This growth has been assisted with the wide availability of high-speed broadband.

The global market will take twice, or maybe three times, that long. Broadband is slow to non-existent in many countries, although progress is being made. Brazil, for instance, reports a 20% annual improvement in households with 4 Mbps (megabits per second) or more. (Netflix requires at least 3 Mbps.)

Japan and South Korea have nearly 50 million people with speeds of 100 Mbps or higher. Fiber technology and broadband are prominent in Japan and South Korea, along with Australia, Hong Kong, Malaysia, Singapore, Taiwan and Vietnam. There is room for growth once higher broadband rates are achieved in New Zealand, Indonesia, Thailand, India and the Philippines.

Overall, OTT video is projected to grow to 6.4% of emerging market households, or 103 million in total, by the end of 2019. That is up from 19.4 million in 2014. By 2025, digital growth will add over 1 billion middle-tier consumers for telecom companies, which will help to open the market for OTT players.

There is no evidence that another streaming service will dethrone Netflix as those broadband services are built out. Disney+, the streaming service set to launch in November, may be a viable global competitor. However, Netflix is still projected to be in first place by a wide margin by 2024.

Media is a universal staple for quality of life, and OTT delivers cheaper content than broadcast or linear television. Some forecasts place 2040 as the pivotal point when essentially every person on the planet will have internet access, up from roughly 50% today. With the same data, others are more optimistic and are forecasting 2030.

The price of being No. 1

Clearly, Netflix has had to pay huge bills for becoming a global streaming service. The company spent $8.9 billion on content in 2017, $12 billion in 2018 and will pay a projected $15 billion in 2019. Reed Hastings, one of the best entrepreneurial tech CEOs of the past decade, is clearly gunning for global territory. Naysayers may be right about high-risk debt becoming an albatross for the company, but the first-mover advantage that Netflix has secured is going to be hard to shake. In that way, the barriers to going global is protection from other competitors, albeit at a cost.

There is plenty of evidence that domestic OTT players will not be able to handle the logistics of going global. For instance, while the TV shows “Friends” and “The Office” are leaving Netflix in the U.S., many will remain with Netflix internationally. According to Amy Reinhard, vice president of acquisitions at Netflix, only Disney is able to compete in international distribution at this time. Netflix also partners with companies like Warner Bros. for international film rights.

Netflix had 19 of the top 20 most-streamed shows in 2018. The sole exception was Hulu’s “The Handmaid’s Tale.” According to Christy Ezzell, senior director of TV Time, this is partly due to Netflix’s investment in global audiences, including significant regional investments in foreign-language content and licensing partnerships. For instance, “Dark” and “Elite” are foreign-language originals that topped the top 20 list and beat out Amazon AMZN, +0.68%  Prime on all accounts, including “The Marvelous Mrs. Maisel.” Notably, two of those are Marvel originals and will count for Disney+ in the future.

Amazon Prime may be reporting large subscriber numbers, but the company most certainly is not doing well on engagement. In fact, Amazon is reportedly in the No. 2 spot for OTT services yet is entirely absent from the top 20 list for content. I suspect subscriber numbers are skewed with Amazon Prime members who are more interested in free shipping or Whole Foods Market discounts.

Interestingly, some criticize Netflix for maintaining its lead at about 87% of subscribers projected through 2023, as if the share should rise toward 100% with new entrants gunning for the company.

I’m sure Hastings, a CEO I wouldn’t bet against, is aware of the many pivot possibilities. Netflix could offer a cheaper subscription tier for catalog content while keeping prices high for newer originals. The company could add video feeds similar to Google’s GOOG, +0.56% GOOGL, +0.52% YouTube or TikTok for three-minute curated content consumption. Or Netflix could continue to meet Disney on its turf and release originals for theaters. With that said, if history is any indication, Netflix is likely to execute well on anything the company attempts.

Global OTT is not a market we’ve seen before, and there’s nothing to compare it to in terms of scale and subscription revenue potential, coupled with the universal, global need for entertainment. To think Netflix is in trouble due to domestic competitors is to misunderstand the opportunity and the slow process of OTT proliferation owing to broadband access.

It could be that Netflix’s $12 billion debt overhang and the competitive landscape will spook the market a few more times and drive down the stock price. For investors who wants a global OTT pure-play company for the long haul, that scenario should be welcomed.

Beth Kindig is a San Francisco-based technology analyst with more than a decade of experience in analyzing private and public technology companies. She publishes a free newsletter on tech stocks at Beth.Technology and runs a premium research service.