Home
Stocks
Outside the Box: Netflix stock has fallen 30% in 3 months but its valuation is still irrational
Prev Article Next Article

Reality is closing in on Netflix.

With the stock NFLX, +4.84% down 30% over the past three months, poor second-quarter results and signs that third-quarter subscriber numbers (which the company reports on Oct. 16) might be below expectations, the market is no longer buying CEO Reed Hasting’s previous ridiculous claims like that Fortnite and YouTube are Netflix’s primary competitors. Even Hastings now admits that the launch of new, competing streaming services will hurt Netflix’s growth.

Sentiment has shifted. There are currently 22 million shares sold short (5% of the float), a 60% increase since the beginning of 2019. While the “sell side” remains bullish, with 70% of Wall Street analysts tracked by FactSet calling Netflix a buy, independent investors are increasingly skeptical of the company’s growth story.

Without positive sentiment to prop it up, Netflix stock remains highly overvalued and a serious risk to shareholders. We warned three months ago that the stock was overvalued after it fell to $325 after disappointing second-quarter earnings. As growth slows due to new competition over the next two years, the stock could fall to $118 a share, a 57% downside to the current stock price.

There are four key elements to our argument.

Competitors are cheaper and offer more content than Netflix

When Netflix first pushed into original content in 2013, it had a significant first-mover advantage. Traditional networks and studios either lacked the expertise to build their own streaming platforms, or they were unwilling to sacrifice the money they earned from licensing their content to Netflix.

That’s all changed. Disney DIS, +0.01%, Warner Media T, +1.00% and NBCUniversal CMCSA, +0.27%  are all pulling their content from Netflix to launch their own streaming services, Amazon AMZN, -0.10% is increasing its content budget, and Apple AAPL, +1.35% just announced the launch of its Apple TV+ service, which will be free for the first year for customers who buy an Apple device.

Monthly Price for Streaming Services in the U.S.

Netflix now operates in a crowded space where it is one of the most expensive options. For the same $12.99 monthly price as Netflix, consumers can get a bundle of Hulu, Disney+, and ESPN+. For $10 a month, they can get Prime Video — along with all the other perks of Prime membership.

The steady loss of licensed content means Netflix no longer has a larger content library than its peers. Amazon has the largest content library, and the Disney bundle’s collection of classic movies, family-friendly entertainment, prestige TV and live sports gives it a breadth of options Netflix can’t match. 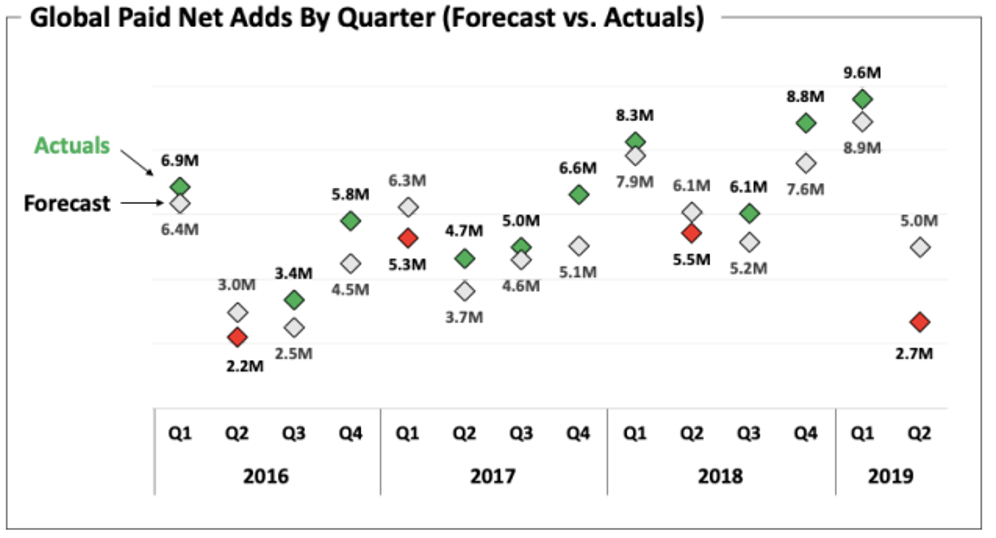 For the first time since the company began its original content push, net subscriber additions through the first half of 2019 (12.3 million) were less than the first half of the prior year (13.8 million in 2018). In the higher-margin U.S. business, the number of subscribers actually declined by 130,000 in the second quarter. This represents a decline of less than 1%, but the fact that the company’s domestic subscriber base appears to have peaked is bad news for Netflix investors.

The pressure on the company’s domestic subscriber base will only increase with the launch of new competitors. Disney+, which launches in November, received so much preorder interest that the website crashed.

A recent report from Evercore ISI suggests the company’s international growth has continued to struggle in the third quarter, with international downloads of its app up only 5% year-over-year in September. The company faces less competition internationally, so this slowing growth suggests its total addressable market may be lower than bulls believe. With competitors (like Hulu) preparing their own international rollouts, we expect Netflix’s international business to start to plateau soon as well.

More: As Netflix earnings nears, here comes an onslaught of competition — and content

Cost increases will only get worse

Netflix has increased the amount of money it pays to content creators in order to secure them to long-term contracts. It recently paid a reported $300 million to secure the services of “Game of Thrones” creators David Benioff and D.B. Weiss. It also recently lost out to Amazon in its bid to sign recent Emmy winner Phoebe Waller-Bridge.

Netflix also continues to invest a significant amount of money in its licensed content library, contrary to executives’ claims that the company’s original content is enough to satisfy its subscribers. It recently paid $500 million to license “Seinfeld.” This price is more than the amount paid for “The Office” and “Friends,” two shows with a broader appeal.

Moreover, the increased competition from rival media companies will make it harder for Netflix to advertise to consumers.

Finally, despite the stock’s 30% decline over the past three months, Netflix remains significantly overvalued. Our reverse DCF model quantifies the growth expectations implied by its stock price.

To justify its current stock price of around $273 a share, Netflix must achieve a 12% after-tax operating profit (NOPAT) margin (up from 8% in the trailing 12 months) and grow NOPAT by 23% compounded annually for 15 years. See the math behind this dynamic DCF scenario.

By comparison, Disney’s $130-a-share valuation implies that it will grow NOPAT by just 4% compounded annually for the next 15 years. See the math behind this dynamic DCF scenario.

As Figure 3 shows, their respective valuations imply that Netflix, which currently earns around $1.5 billion in NOPAT compared to around $10 billion for Disney, will earn around $9 billion more than Disney 15 years from now.

The stock price still implies that Netflix can grow at an exponential rate over the long term, even though subscriber growth is already plateauing. This slowing growth, along with mounting competition, makes it even harder to justify the overblown valuation.

If Netflix grows NOPAT by 17% compounded annually for the next 15 years, the stock is worth just $118 a share today, a 57% downside to the current stock price.This scenario assumes Netflix’s revenue growth rate will taper from 28% in 2019 to below 10% over the long term. In effect, it assumes that growth will be linear, rather than exponential. See the math behind this dynamic DCF scenario.

David Trainer is the CEO of New Constructs, an independent equity research firm that uses machine learning and natural language processing to parse corporate filings and model economic earnings. Sam McBride and Kyle Guske II are investment analysts at New Constructs. They receive no compensation to write about any specific stock, style or theme. New Constructs doesn’t perform any investment-banking functions and doesn’t operate a trading desk. Follow them on Twitter @NewConstructs.