Shares of Fastenal Co. soared toward a record high Friday, as the industrials company managed to fend off a continued slowing in economic activity and a mysterious weakening in its local construction business to produce a third-quarter profit and sales that rose above Wall Street forecasts.

The company, which makes industrial vending machines, tools and other manufacturing and construction equipment, reported net income for the quarter to Sept. 30 that increased to $213.5 million, or 37 cents a share, from $197.6 million, or 34 cents a share, in the year-ago period, topping the FactSet consensus of 35 cents a share.

Sales increased 7.8% to $1.38 billion, above the FactSet consensus of $1.37 billion, amid higher unit sales and higher product pricing.

Meanwhile, gross margin fell to 47.2% from 48.1% a year ago, because of increased sales of lower-margin products, inflation and higher freight expenses.

Fastenal managed to beat expectations, although the company said that the “general slowing in economic activity,” which resulted in a profit and sales miss in the second quarter, “continued in the third quarter of 2019.”

Also read: Service side of the economy grows at slowest price in 3 years, ISM finds, adding to recession worries.

Chief Executive Daniel Florness said in the post-earnings conference call with analysts that he believed the growth in product sales was a “tremendous accomplishment” in an economy “where things have weakened.”

There was a hiccup in the company’s business, however, that Florness said he decided to bring up, basically in the interest of full disclosure.

“That is, the one item in the quarter that kind of makes me scratch my head is our construction business,” Florness said. “That growth has slowed dramatically as we’ve come into 2019 and in all honesty, we don’t completely understand it.” 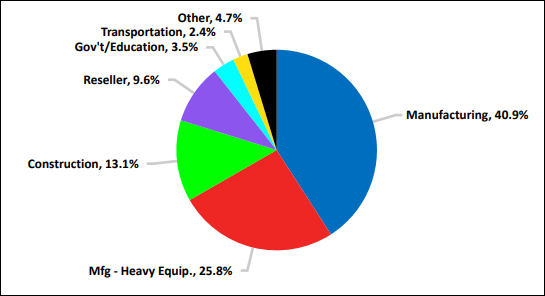 He said the weakness seemed to be concentrated in the company’s smaller customer accounts, as the larger account business continues to grow well. Although some of the weakness in local businesses can be attributed to the closing of 5% of locations a year, Florness said that’s not a new phenomenon, as the closings have been happening for the past four to five years.

Florness said he talked to peers that sell into the same arena, and they have also observed that while their larger accounts aren’t seeing the weakness, their smaller account businesses are slowing as well.

“It’s more of an observation than a conclusion,” Florness said. “I apologize for that.”