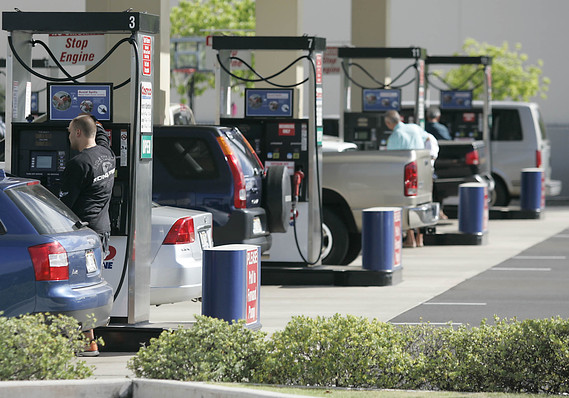 Falling gasoline prices have contributed to lower inflation in the U.S., the CPI showed.

The numbers: Consumer inflation in the U.S. was held in check in September by falling prices of gasoline and used vehicles, giving the Federal Reserve further cause to cut interest rates if the economy gets any weaker.

The consumer-price index was flat in September, the government said Thursday, marking the smallest change since January. Economists polled by MarketWatch had forecast a 0.1% advance.

The increase in the cost of living over the past 12 months was also unchanged at 1.7%.

The low rate of inflation, reflected in the CPI and other price barometers, may allow the Fed more leeway to trim rates if growth in the economy continues to slow. Wall Street puts a high chance the central bank will reduce rates again at the end of the month. 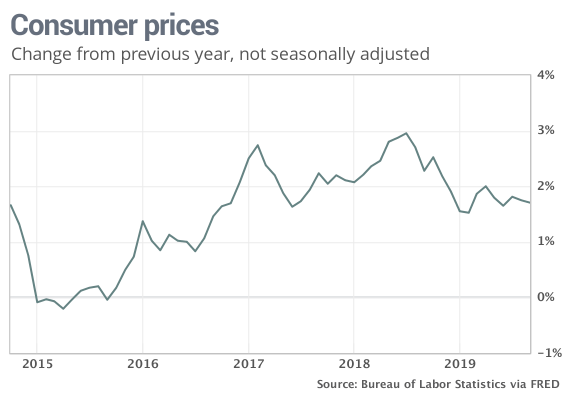 Separately, the Bureau of Labor Statistics estimated that Social Security recipients would get a 1.6% cost-of-living increase in 2020. COLA adjustments are based on the CPI report.

What happened: The cost of gasoline RB1, +0.00% and natural gas NG1, +0.00% fell in September, accentuating a downtrend in energy prices.

The cost of food rose slightly, mostly for takeout and other meals prepared outside the home.

Another closely watched measure of prices that strips out food and energy costs inched up 0.1% in September, the smallest increase in four months.

The yearly increase in the so-called core rate was unchanged at 2.4%.

Prices rose for rent, medical care and airline fees, but they fell sharply for used vehicles and clothing. Increases in the cost of used cars and apparel had driven up overall consumer prices during the summer.

After adjusting for inflation, hourly wages were flat last month. They’ve increased a modest 1.2% in the past year.

The survey of consumer prices tends to run hotter than the Fed’s preferred inflation barometer known as the price index for personal-consumption expenditures. The PCE is up just 1.4% over the past year — well below the Fed’s 2% annual inflation target.

Big picture: Some parts of the economy are experiencing more inflation than others, but by and large price pressures are barely causing a ripple. Slowing U.S. growth and sluggish global trade have also reduced the cost of many raw materials or partly finished goods.

With inflation largely under wraps, the Fed has said it would be prepared to cut interest rates again if the outlook for the U.S. economy worsens. The central bank is worried the U.S. trade war with China will damage a record expansion now in its 11th year.