Home
Stocks
What is an ETF?
Prev Article Next Article 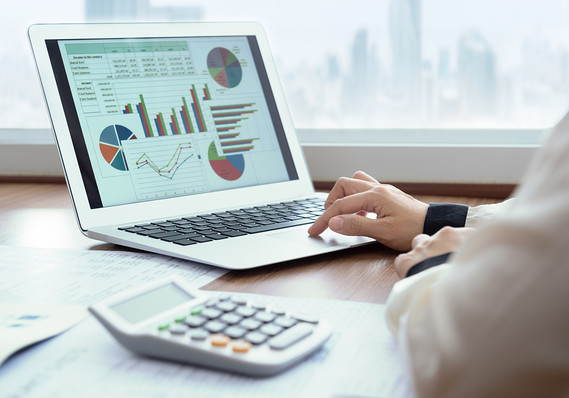 Get savvy about ETFs with our handy guide

‘ETFs,’ or Exchange-Traded Funds, are pooled collections of investments, like stocks, bonds, or commodities. Like mutual funds, ETFs are packaged to allow investors access to a group of securities, offering more diversification than you’d get by buying, say, one company’s stock, or bonds from one issuer. But ETFs are different from mutual funds in important ways.

More easily-traded: “Exchange-traded” means that ETFs change hands on an exchange, like stocks. Most investors don’t have to worry about the mechanics behind trading. What “exchange-traded” means in practice is that you can buy and sell — and see the price of — an ETF at any given moment, rather than waiting until the trading day is over for everything to settle, as mutual funds require.

That also helps make ETFS more transparent than mutual funds. The specific holdings within any ETF are knowable any day, whereas mutual fund holdings are only published every quarter. That’s so that all the participants in the market, from big institutions down to someone trading small amounts from a home computer, can determine the value of the fund at any time, explains J. Garrett Stevens, CEO of Exchange Traded Concepts. “You’ve got to know what’s in there.”

Lower tax burden: When an investor sells shares of a mutual fund, he or she is effectively forcing that fund manager to sell securities to honor the redemption request. That may result in capital gains implications for investors, whether or not they’ve sold their shares during the year. That doesn’t happen in ETFs, so there’s no tax burden. (If you’re really interested in the mechanics, this story has some background on ETF infrastructure.)

Cheaper: The ETF industry grew up on what’s called “passive investing.” Instead of relying on money managers who pro-actively buy and sell stocks or bonds according to a strategy they develop — and may hone over time — passive managers pre-determine an index for their fund to track. There are some actively-managed ETFs, but they only account for about 2% of the entire fund universe, according to data from CFRA First Bridge. 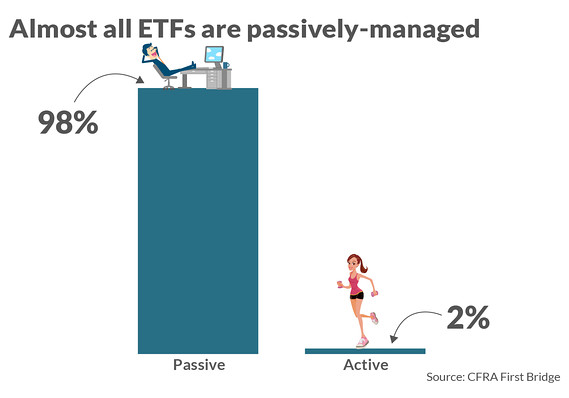 The Index tracked by an EDF may be something already known in the market — say the S&P 500 SPX, +0.91%   — or may be something fund managers create on their own. That strategy could be a broad investing theme, like only “momentum” stocks, or it could take a more tailored approach like the idea described in this story: investing in Chinese companies, but avoiding those owned by the Chinese government.

Every so often, usually annually, an ETF manager will review the holdings in the fund and make sure they still match up to the mission set out as the fund’s original objective. But in general, there’s far less buying and selling of the securities that make up a passively-managed fund than an actively-managed one, which helps keep investor fees much lower.

Investors pay less for ETFs in both the active and passive categories than for mutual funds.

You should always read the fund documentation before investing to be sure. Some ETFs offer lower teaser fees to start off, with the understanding that the fee may increase in time.

Also make sure you know the specifics behind the index that the fund tracks. Some funds may have similar-sounding names or themes. Here’s one example:

Three granddaddies of the ETF universe, iShares’ Core S&P 500, IVV, +0.95%  , Vanguard’s 500 Index Fund, VOO, +0.93%  and the SPY ETF, formally known as SPDR S&P 500 Trust SPY, +0.95%, all passively track the benchmark S&P 500 stock index. But there’s another set of funds that takes the same 500 stocks, but assigns them all an equal index weighting, rather than letting stocks with bigger market capitalizations dominate the index. One example of an equal weight ETF that tracks the S&P 500 index comes from Invesco: RSP, +0.89%  A tweak like that can sound small but have a sizable impact on returns, so it’s important to know what you’re buying into.

One downside: ETFs are far less available in traditional employer-sponsored retirement plans. Like stocks, ETFs can’t easily be bought in fractions, Stevens notes, which is what needs to happen when small percentages of employee paychecks are making regular, ongoing purchases of a fund.

More to the point, “many of the key features of ETFs become far less appealing in a 401(K) plan,” Morningstar’s Ben Johnson says. Most employer-sponsored retirement plans offer access to low-cost indexed mutual funds. What’s more, the tax efficiency mentioned above is moot in a pre-tax investment structure like 401(k)s. Finally, the other advantage of ETFs mentioned here, tradeability, “is not something you want 401(k) participants to be doing,” Johnson said. “You want them focused on the long-term.”

What is factor investing?