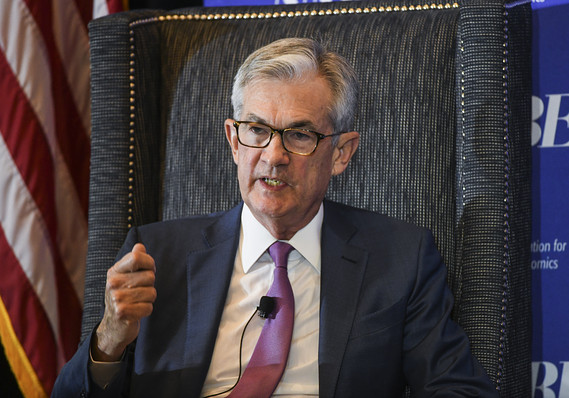 Federal Reserve Chairman Jerome Powell has said the central bank would act as appropriate to sustain the expansion.

Federal Reserve officials were more worried about the U.S. economy by the time they met in mid-September, according to minutes of the central bank’s meeting released Wednesday.

“Participants generally judged that downside risks to the outlook for economic activity had increased somewhat since their July meeting, particularly those stemming from trade policy uncertainty and conditions abroad,” the minutes said.

There was even talk about possible recession, with several Fed officials noting that the probability of a recession “had increased notably in recent months.”

Even the Fed research staff had grown more worried.

While the staff’s official forecast remained that the economy would grow slightly above 2% annual rate this year and next and slightly below 2% in 2021 and 2022, signs had emerged that gave them pause.

“Softness in business investment and manufacturing so far this year was seen as pointing to the possibility of a more substantial slowing in economic growth than the staff projected,” the minutes showed.

A few weeks after the Fed meeting, a worse-than-expected reading in the ISM’s manufacturing sector gauge heightened investors concerns that a recession could hit the economy, but these fears ebbed somewhat after the September employment report showed that the unemployment rate hit a new 50-year low reading of 3.5%.

During their meeting, a few Fed officials pledged to be vigilant about signs of a softening in the labor market.

“One risk that the economy faced was that the softness recorded of late in firms’ capital formation, manufacturing and exporting activities might spread to their hiring decisions, with adverse implications for household income and spending,” the minutes said.

“Participants observed that such an eventuality was not embedded in their baseline outlook,” the summary added.

Fed officials were divided about whether to cut interest rates,. They eventually agreed, by a 7-3 vote, to trim its benchmark rate by a quarter percentage point to a range between 1.75% and 2%. That was the second straight meeting with a rate cut.

During the deliberations, many officials thought the Fed should stand still and await further developments.

“They contended that the key uncertainties were unlikely to be resolved anytime soon,” the minutes said.

Only two Fed officials wanted an aggressive half percentage point cut which they said would reduce the risk of an economic downturn.

The minutes said little new about the plans by policy makers for future rate cuts. The central bank will meet again on Oct. 31. Only seven of 17 officials had backed another cut by the end of the year, according to their “dot-plot” interest rate projections.

Fed Chairman Jerome Powell said Wednesday the central bank was operating on a meeting-by-meeting basis and would act as appropriate to sustain the expansion.

Investors have little doubt the Fed will cut interest rates again after their Oct. 29-30 meeting. The probability of a rate cut is now slightly above 80%, according to the CME Group’s FedWatch tool. The odds of an easing jumped after the ISM manufacturing sector data was published last week.

According to the minutes, officials discussed the strains in the short-term money markets that many analysts have tied to the Fed’s program to shrink its balance sheet.

But the discussion in the minutes is now a bit stale since Powell announced Tuesday that the Fed would “soon” start expanding the size of its balance sheet by purchasing short-term Treasury bills.

One important note, not mentioned by Powell, was that “several” officials supported consideration of a “standing repurchase agreement facility” to combat future market volatility from a lack of short-term liquidity. Many economists think such a program could be up and running by early 2020.

Stocks DJIA, +0.78%   were higher after the minutes were published on Wednesday on hopes of progress in U.S. and China trade talks.

See also: Powell says economic expansion can last, but there are risks