As unnerving as the trade-war has been for investors lately, some volatile sessions are at least keeping investors on their toes as investors head toward earnings season.

Equities are set to whipsaw higher Wednesday, a day after a 300-point tumble for the Dow fueled by trade worries. Early Wednesday, futures were climbing on talk China may go for a partial trade deal. Some are also crediting Tuesday’s pledge by Federal Reserve Chairman Jerome Powell to resume purchases of short-term Treasury bonds for the cheerier mood.

So this is the increase Powell suggests to excess liquidity, before you all go tin-foil hat “QE-bananas”

It could though be important anyway for markets in 2020 in particular.https://t.co/IvvpL7elmc pic.twitter.com/qsbzMMTL2K

If the U.S. and China can work past some big differences at talks that start Thursday, that wouldn’t go unwelcome for one big sector — tech stocks. That is as our call of the day warns investors to mark their calendar for a “pivotal $160 billion” crucial moment ahead for the tech space.

“The biggest worry looming remains the December 15 tariff deadline which would be a potential ‘gut punch’ if this tariff is not removed or kicked further down the road by the Trump administration given its negative consequences for semi [conductor] players and the broader tech space with Apple remaining the poster child for these trade worries given its Foxconn flagship iPhone,” explains Daniel Ives and Strecker Backe, analysts at Wedbush, in a note to clients.

The backdrop: The U.S. is set to impose a second round of 15% tariffs on $160 billion of Chinese imports by mid December, affecting virtually all goods imported from that nation. In September, Apple and other companies in that space got a reprieve after the U.S. exempted cellphones, laptops and other electronic goods from a September round of tariffs.

But the hourglass is running down on that one, and headed into third-quarter earnings, China remains the biggest black cloud for the tech sector, Wedbush analysts warn.

“Tech stocks are ultimately caught in the crossfire with Apple and the semi space remaining front and center as the Street is carefully watching how tech vendors are dealing with the current trade tensions,” said the analysts.

It seems investors can’t get enough of cash lately. But a word of caution from Wells Fargo Investment Institute strategists Chao Ma and Paul Christopher, who tell clients in a note that those who “react emotionally or out of fear may elect large cash positions that, over time, could impair their longer-term potential returns and endanger their financial goals.”

They provide our chart of the day, which shows how assets have performed before, during and after a recession. 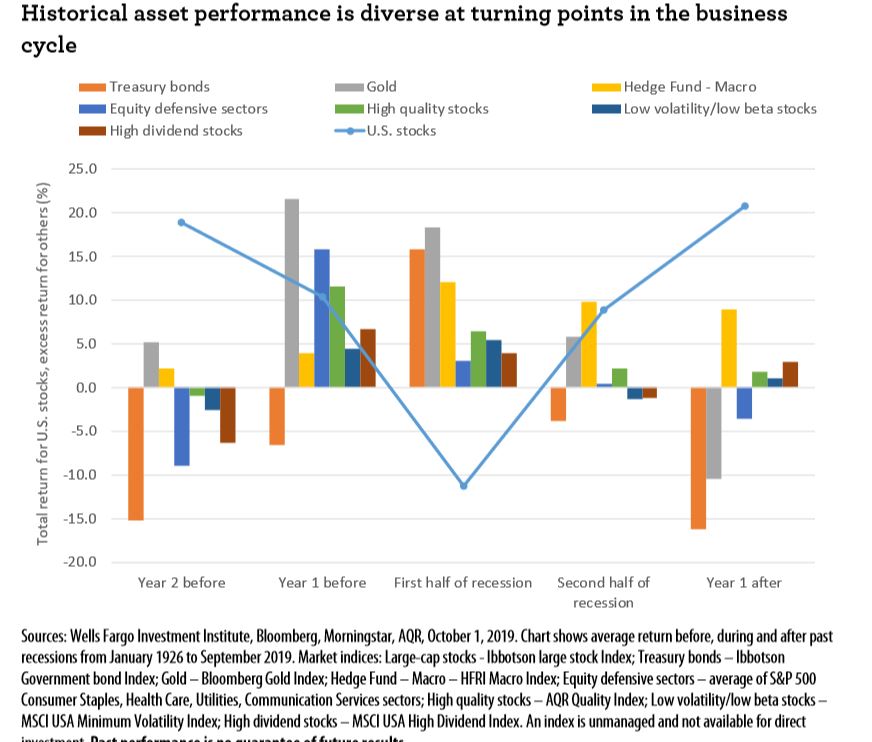 More on the trade front: China is demanding the U.S. drop its latest blacklist focused on artificial intelligence companies, saying it will “take all necessary measures to resolutely safeguard.”

Read: SocGen says this is the ‘worst-case scenario’ of U.S. clampdown on capital flows to China

Meanwhile, China state-run media has accused Apple AAPL, +0.85%  of shielding “rioters” in Hong Kong via an app in its App Store. Apple has yet to respond.

Johnson & Johnson JNJ, -1.51%  shares are down after a Philadelphia jury awarded $8 billion in damages over its antipsychotic Risperdal drug. It’s just one of 13,000 lawsuits involving the drug. JNJ has vowed to fight the verdict.

Millions of people in northern and central California could face power outages as utility PG&E PCG, +1.24%  begins cutting electricity in a drastic measure aimed at preventing wildfires. And people aren’t too happy about it:

The PG&E power shutdown feels like the next step in the Bay Area’s civilizational regression.

Appears due to liability concerns after last year’s Paradise fire.

Rather than improving tech, accepting it was an accident, or some other option…shut down power for 800k people.

One stingy millennial banks 70% of his salary. An unheated apartment helps