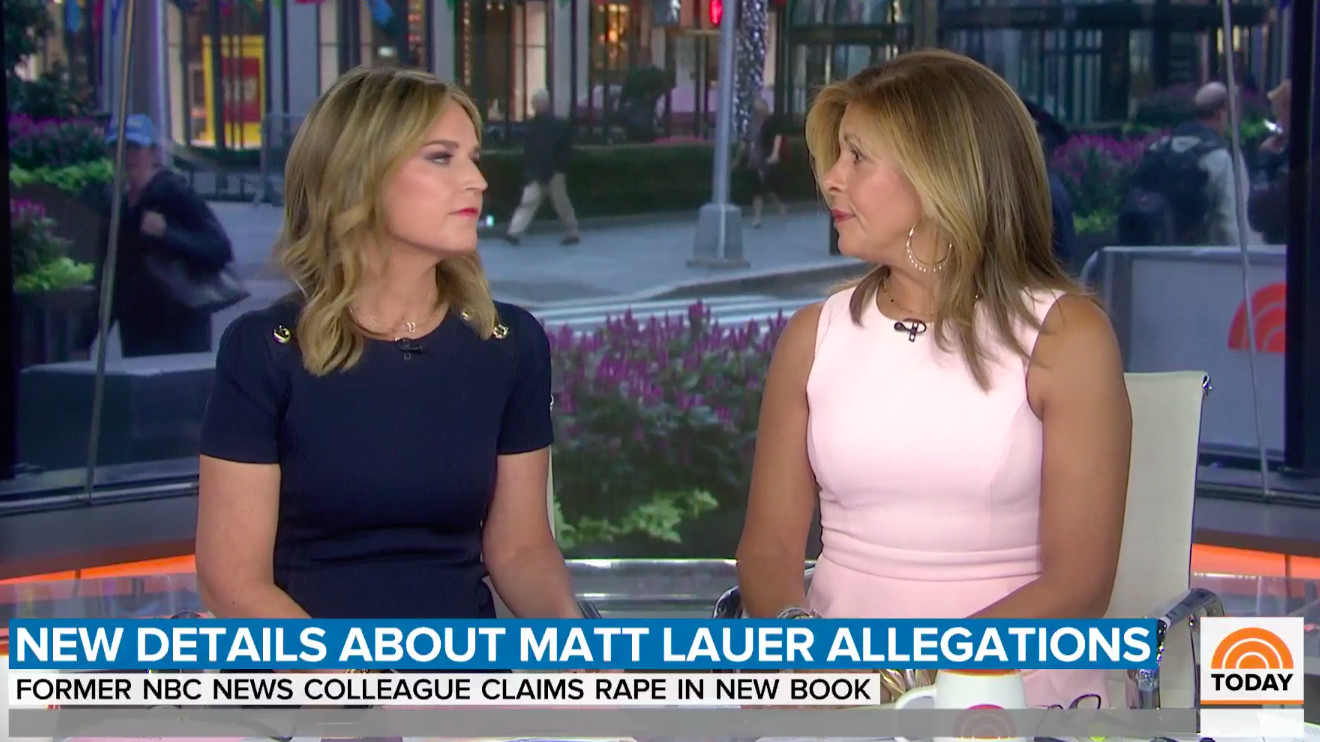 Almost two years ago, “Today” show host Savannah Guthrie fought back tears live on the air while telling viewers that her co-anchor Matt Lauer had been axed for “inappropriate sexual behavior in the workplace.” Colleague Hoda Kotb sat in Lauer’s seat — which would become hers not long afterward.

It was déjà vu on Wednesday morning, as the “Today” show anchors told their viewers some disturbing new details about those allegations, including charges that Lauer raped a former NBC News CMCSA, +0.48%  employee at the 2014 Sochi Olympics.

“I’m having a weird moment, that we were sitting here just like this two years ago,” said Kotb, adding that she and Guthrie “did a little prayer” before coming on the air to decide how to handle the situation.

The accusations are laid out in Ronan Farrow’s new book, “Catch and Kill,” which Variety read ahead of its scheduled Oct. 15 release date and published on Tuesday night.

The book identifies the woman — who also made the original 2017 complaint against Lauer — as Brooke Nevils, who was former “Today” co-host Meredith Vieira’s personal assistant. Nevils claims that after getting drinks with Lauer and Vieira, she went to Lauer’s room, where he raped her anally even though she “declined several times.” She said he “just did it” and it was not consensual.

NBC News released the following statement in response to the Variety report: “Matt Lauer’s conduct was appalling, horrific and reprehensible, as we said at the time. That’s why he was fired within 24 hours of us first learning of the complaint. Our hearts break again for our colleague.”

On the air Wednesday morning, Guthrie and Kotb once again appeared to fight back tears as they took a moment to get real with their viewers.

“This is shocking and appalling, and I honestly don’t even know what to say about it,” said Guthrie. “And it’s just very painful … it’s very, very, very difficult.”

Hoda reflected on how this has rocked her perception of someone that she worked with for 12 years.

“You feel like you’ve known someone for 12 years … you feel like you know them inside and out, and then all of a sudden a door opens up, and it’s a part of them that you didn’t know,” she said.

Related: How to respond after someone close to you is accused of sexual assault

“They’re not allegations of an affair, they’re allegations of a crime, and I think that’s shocking to all of us here who’ve sat with Matt for many, many years,” she added. “So I think we’re just gonna continue to process this part of this horrific story.”

Both anchors also stood behind Nevils. “I know it wasn’t easy for our colleague Brooke to come forward then, it’s not easy now, and we support her and any women that come forward with claims,” said Guthrie.

NBC isn’t the only network rocked by charges of sexual misconduct against one of its stars, however. Just as the Me Too reckoning was building steam in 2017, Charlie Rose was also fired from “CBS This Morning” for inappropriate behavior, as were NBC’s Billy Bush, “Today” producer Matt Zimmerman and Fox’s Bill O’Reilly.