Home
Stocks
Key Words: Christians ‘have a moral obligation to enthusiastically back’ Trump in 2020, according to prominent evangelical
Prev Article Next Article 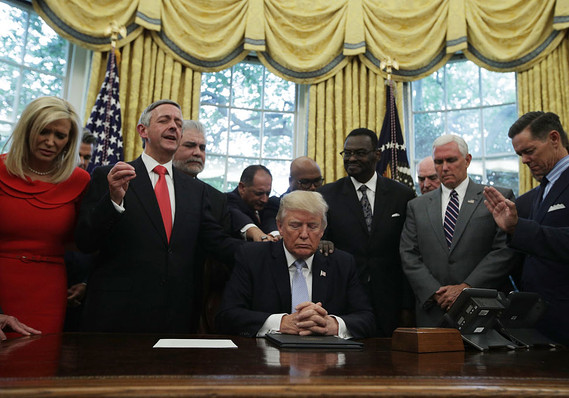 ‘Render to God and Trump’

That was the original title of a book, written by Faith and Freed Coalition founder Ralph Reed, coming out next year ahead of the general election, according to Politico.

The title, which was a reference to the biblical verse “Render to Caesar the things that are Caesar’s,” has since been changed to “For God and Country: The Christian case for Trump.” The name is different, but the message is not.

In the book, Reed, one of Trump’s biggest Christian backers, argues American evangelicals “have a moral obligation to enthusiastically back” the president.

Why? Well, Reed says that evangelicals have a duty to defend the incumbent Republican leader against “the stridently anti-Christian, anti-Semitic, and pro-abortion agenda of the progressive left.”

A senior administration official was quoted in Politico explaining why Trump resonates so much with his evangelical base.

“Part of the reason why many religious leaders support Trump is because he is great on life, religious freedom, judges, Israel, taxes, conscience protections, fetal issue and also because Hillary Clinton and his would-be opponents next year are so awful on all of the above,” the official said.

His approach is clearly working, with 81% of self-described white, born-again or evangelical Christians having voted for Trump in 2016, according to Pew. Reed’s group, specifically, invested $18 million in get-out-the-vote efforts during the midterms and has warned conservative Christians “pretty much everything” is on the line in 2020.

Of course, not all religious leaders are on board:

Ralph Reed is wrong. White evangelical Christians (and all people of faith) have a moral obligation to oppose the white nationalist and corrupt presidency of Donald Trump. Too many have turned Mr. Trump into a false idol. We need to defend the common good. https://t.co/2pDq8IM8y0