Earnings season for banks begins Oct. 15, when J.P. Morgan Chase, Citigroup and Wells Fargo are scheduled to announce their third-quarter results, with Bank of America following up the next day.

Banks’ earnings are expected to have held up well despite low interest rates. Still, the Federal Reserve’s policy change means difficult times ahead for most banks.

Standing out among dismal sectors

Here are expected changes in earnings per share for the 11 sectors of the S&P 500 SPX, -1.56%, based on weighted aggregate consensus earnings estimates among analysts polled by S&P Global Market Intelligence:

The financial sector is expected to rank a close second for earnings growth. Considering the boost to earnings per share from stock repurchases, that is unimpressive.

Based on his analysis of the Federal Reserve’s industry data through Sept. 25, Odeon Capital Group analyst Dick Bove expects “big universal and investment banks … to publish positive results” for the quarter. In a report Oct. 7, Bove named Citigroup C, -2.57%  and Morgan Stanley MS, -2.11%  as his favorites.

Based on the Fed data, the veteran analyst said commercial real estate loan growth had slowed, and that commercial and industrial lending was at a standstill. He added that lending to non-bank financial companies was soaring and that “home mortgage growth seems to have found its footing and is steadily increasing.”

The Federal Open Market Committee’s decision to make two cuts to the federal funds rate during the third quarter was meant to help reduce the chance of the U.S. economy from slipping into recession, but it is a gloomy development for most banks. It means shorter-term loans that are indexed to short-term rates will reprice at lower rates, reducing lenders’ net interest income. Most banks aren’t positioned to make up for the lost revenue with lower funding costs.

Meanwhile, the bond market has anticipated further central-bank stimulus by pushing long-term interest rates down considerably, which hurts the banks.

President Trump continues to demand much lower interest rates, believing the U.S. is at a competitive disadvantage to other developed economies. Keefe, Bruyette & Woods analyst Frederick Cannon listed the banks he expected to suffer the greatest earnings declines if the Fed’s new policy were taken to a logical extreme, with negative interest rates.

On Oct. 8, bank analysts at Jefferies, led by Ken Usdin, lowered 2019 earnings estimates for 23 of 38 banks, while lowering stock-price targets for 24. Looking ahead, he noted “estimated net income growth flips to negative in ’20 before returning to a modest positive in ’21.”

In our earnings preview last quarter, we pointed out that the S&P 500 banking industry group was trading at a forward price-to-earnings valuation of about 60% of the full index’s valuation. That was below the long-term level of about 70%.

As of the close Oct. 7, the banks traded for 62% of the valuation of the index. Usdin wrote: “While valuations remain appealing on the surface (both absolute and relative), EPS estimates are quite dependent on the Fed’s uncertain future path for interest rates. This makes it harder to gain conviction” in valuations.

Usdin called this year’s action for bank stocks a “roller coaster,” and the chart shows much greater volatility for the group than for the full S&P 500: 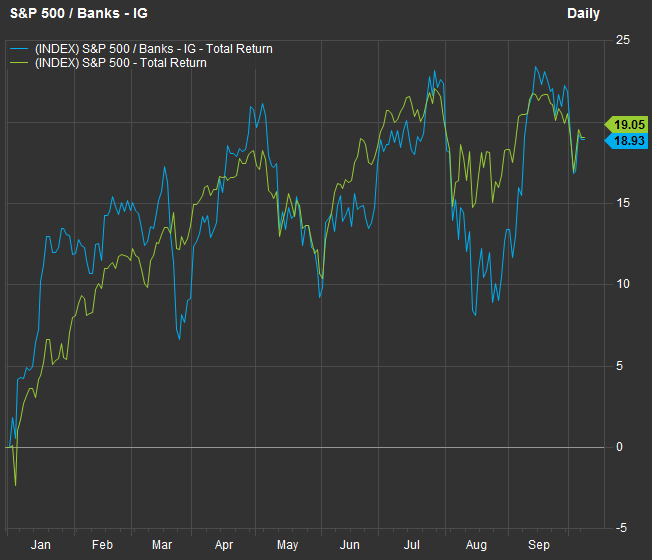 Here are expected EPS results for the largest 10 U.S. banks by total assets, among analysts polled by FactSet, compared with actual results from the third quarter of 2018:

You can click on the tickers for more about each company.

Here’s how the group’s consensus quarterly EPS estimates have been revised since the end of the second quarter:

And here’s how the banks’ full-year EPS estimates for 2019 have changed since the end of the first quarter:

Moving out to 2020 estimates, we can see larger recent estimate cuts:

Don’t miss: The hottest stock-market sector in the past year beats technology and real estate