Major stock market indices remain within shouting distance of all-time highs at the same time that investors are buying up corporate and sovereign debt, extending an “everything rally” that has been a key characteristic of financial markets in 2019.

Torsten Slok, chief economist at Deutsche Bank Securities finds this state of affairs questionable, given that low bond yields appear to indicate investor unease about the state of the global economy at the same time that survey data from the Institute for Supply Management reflect weakening manufacturing and services sectors.

“Normally the business cycle is the key driver of asset prices, see chart below. But not at the moment,” Slok wrote in a Tuesday note to clients. “How can the S&P500 be so high and credit spreads so tight when rates markets are so worried about the growth outlook and therefore the corporate earnings outlook?” 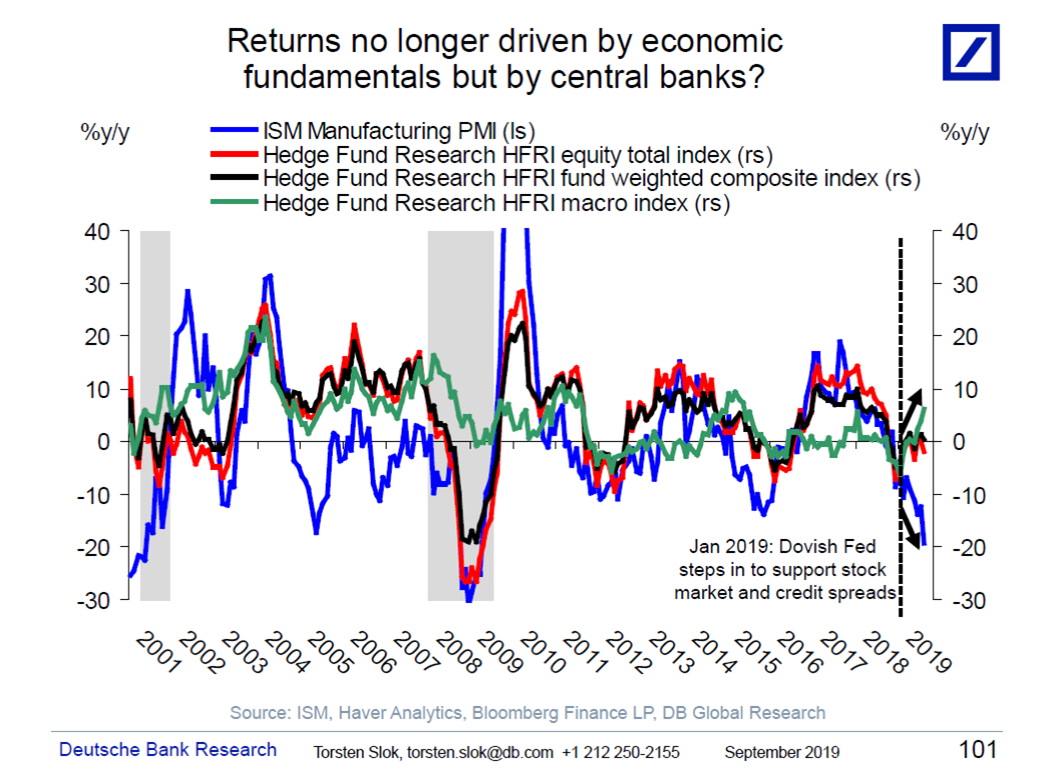 “Perhaps the answer is that equity and credit markets are no longer driven by fundamentals, but instead by [the Federal Reserve] and [European Central Bank’s] promises of lower rates, more dovish forward guidance” and open-ended bond purchases known as quantitative easing (QE), he posited.

The Federal Reserve decided to cut interest rates for the second time in as many meetings on Sept. 18, and the European Central Bank cut a key benchmark rate further into negative territory and relaunched its quantitative easing program one week before.

“Put differently, we may have gotten to a point where investors ignore fundamentals because central banks will always step in with more QE and easy money to limit any widening of credit spreads and declines in the stock market,”Slok added. In short, because of unlimited central bank safety nets . . . S&P 500 may not decline, and credit spreads may not widen next time we enter a recession.”