Home
Stocks
The Margin: Flu season 2019 looks bad — so fight it with these 10 proven treatments
Prev Article Next Article

The flu is nothing to sneeze at.

Almost 42.9 million cases of the flu were reported last year, according to CDC estimates, including 61,200 deaths, and up to 647,000 people hospitalized in what ended up being the longest flu season in a decade. And those numbers don’t include all of those sick puppies laid up with the virus who didn’t go see a doctor.

And the year before was the deadliest flu season in more than four decades, with 80,000 deaths caused by the flu in the U.S., including 180 children, according to the CDC. And that came on the tails of Australia’s worst flu outbreak in two decades.

In fact, Australia’s flu seasons have sometimes predicted those in America. So considering Australia just had an unusually early and severe flu season, as the New York Times reported, U.S. health professionals are bracing for the virus to come back with a vengeance for winter 2019-2020.

Flu season begins in October, with flu activity peaking between December and February, so now is the time to get ahead in protecting yourself and your family. The average household spends $338 on over-the-counter medications every year, which ramps up during cold and flu season, and $328 billion on prescription retail drugs available at pharmacies. But before you start banking on supposed cure-alls like supplements, fortified lozenges and Cold-EEZE — or worse, skipping the flu shot like more than 40% of Americans — read up on these scientifically proven preventatives and treatments that doctors and registered dietitians prescribed to MarketWatch.

BEFORE YOU GET SICK

Get your flu shot. Don’t let reports of some seasons having somewhat ineffective vaccines put you off. (For example, the 2017-2018 vaccine’s efficacy rate was just about 36%, which means it cut flu-related doctors visits by that amount.) The CDC still recommends you get it, because the vaccine can still lower your risk of complications or dying from the flu even if you do get sick. Don’t delay, as Dr. Keith Roach, physician at NewYork-Presbyterian/Weill Cornell Medical Center, told MarketWatch that it takes two weeks for the vaccine to work. “There’s some benefit, and it’s usually free, since it’s covered by insurance, so the value that you get for the cost is infinite,” he said. If you’re uninsured, the shots run between $40 and $60 at drugstores like CVS, Walmart and Target, or those with Costco or Sam’s Club memberships can get jabbed for just $20 or $30. You can also find health centers near you, or look up your state’s vaccine offerings, at Vaccines.gov. 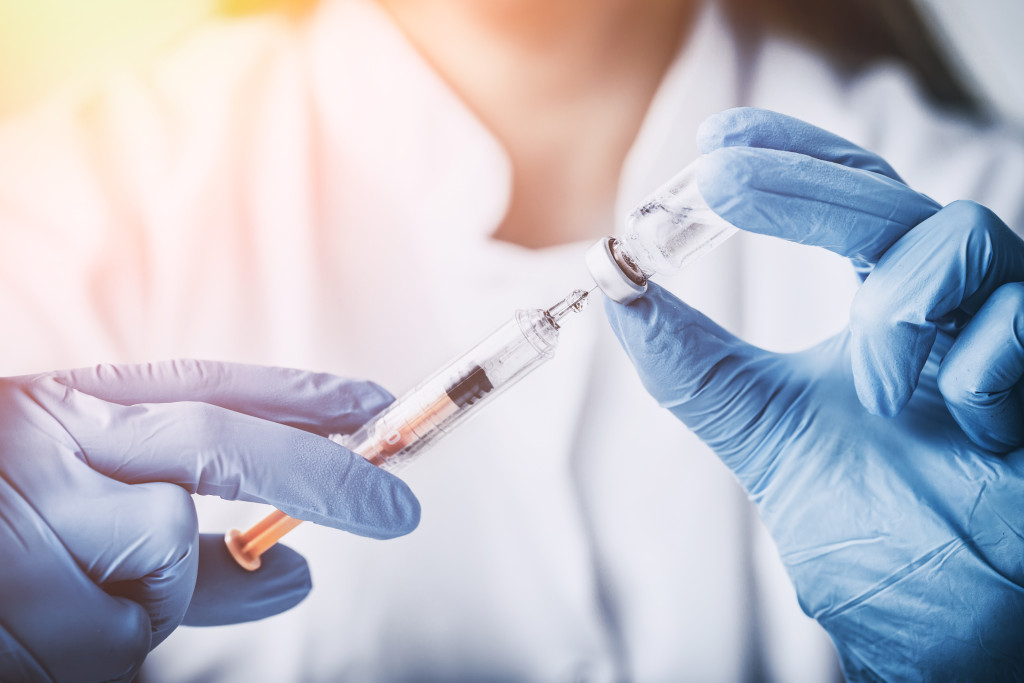 Stock up on hand sanitizer and antibacterial wipes. “The main way we get the flu is through personal contact,” explained Dr. Roach, “or touching something that a person with the flu has already touched — which, in a city or an office, can mean practically anything.” You should wash your hands frequently, especially after shaking hands with someone or grabbing a doorknob, but in a pinch, Dr. Roach said that swiping your hands or cleaning your desk or phone with cleaning wipes (just $1 or less for travel-size sanitizer and $5 and up for wipes) is “still worth doing.”

Eat orange fruits and veggies, plus shellfish and greens. While there’s scant evidence to support supplements, there is research to support that getting immune-boosting vitamins and minerals from whole foods is important for holistic health. “Zinc and vitamin C are both involved in the body’s response to infection and are utilized by the cells of the immune system,” said Tanya Zuckerbrot, a registered dietitian and best-selling of author “The F-Factor Diet,” who recommends fortifying yourself with sweet yellow peppers and red peppers, kale and broccoli for vitamin C, and oysters, lean lamb and beef, spinach and mushrooms for zinc.

Get plenty of sleep.  “Sleep is actually more important than diet,” said Dr. Roach, pointing to research showing your immune system releases proteins called cytokines in your sleep, which are needed to fight infections and inflammation. So not catching enough Zs suppresses your immune system — which makes you more likely to catch a cold or the flu if you come in contact with it.

Exercise. Breaking a sweat doesn’t just make your muscles stronger — it also pumps up your immune system. A 2010 study found that regular exercises nearly halved their risk of catching cold viruses, and those who still got sick suffered less severe symptoms. “Exercise will absolutely boost the immune system, even into the day after you exercise,” said Dr. Roach.

Load up on supplements and zinc lozenges. “It’s all snake oil,” said Dr. Roach — and that goes for effervescent vitamin C megadoses (familiar ones include Airborne and Emergen-C that run $7 to $13) and lozenges fortified with zinc ($5 to $10). Consumer Reports reported that Americans spent $35 billion on dietary supplements in 2015 alone — even though manufacturers don’t have to prove to the Food and Drug Administration that their products are effective or even safe. “There is no good data that shows they are effective,” said Dr. Roach.

See a doctor as soon as you experience symptoms. You want to be prescribed an antiviral flu medication like Tamiful GSK, -0.70%  or Roche RHHBY, -1.43%   ($50 to $130, often covered by insurance) as soon as possible, which can reduce the time that you’re sick from half a day to two days. “Even one less sick day is a huge monetary incentive for someone,” said Dr. Roach. “This isn’t walking around with a box of tissues — the flu is lying in bed wishing you were dead. The muscle aches feel like you were hit by a truck. So by all means, see a doctor and get an anti-flu medication at the earliest possible onset of symptoms, which include the sudden onset of muscle aches, fever, headache and often some upper respiratory symptoms such as a runny nose, cough or sore throat.”

Use over-the-counter meds to ease specific symptoms. But don’t grab just any cold medicine just for the sake of throwing something else at the flu. Dr. Roach recommends tailoring your medications to your ailments, such as acetaminophen (Tylenol) for the muscle aches, suphedrine (Sudafed) for stuffy noses, and dextromethorphan (Robitussin) for coughs, or combination drugs (DayQuil/NyQuil PG, -1.07% or Tylenol Cold + Flu JNJ, -0.79% ) to treat multiple symptoms. “But don’t take something if you don’t need it,” he said. “Some of these can make you feel wired, raise your heart rate or give you dry mouth.”

Slurp chicken soup. “There really is something to chicken soup,” said Dr. Roach. “Studies have found that viral shedding actually is decreased when you have chicken soup, compared with just hot water.” Nutritionist and registered dietitian Keri Glassman also suggests throwing some Cordyceps mushrooms into your soup, “which are antibacterial and are also known to be effective in fighting off viral infections,” she said. “And add in garlic and onion — not just for flavor, but for a dose of antiseptic and immunity-boosting compounds.” 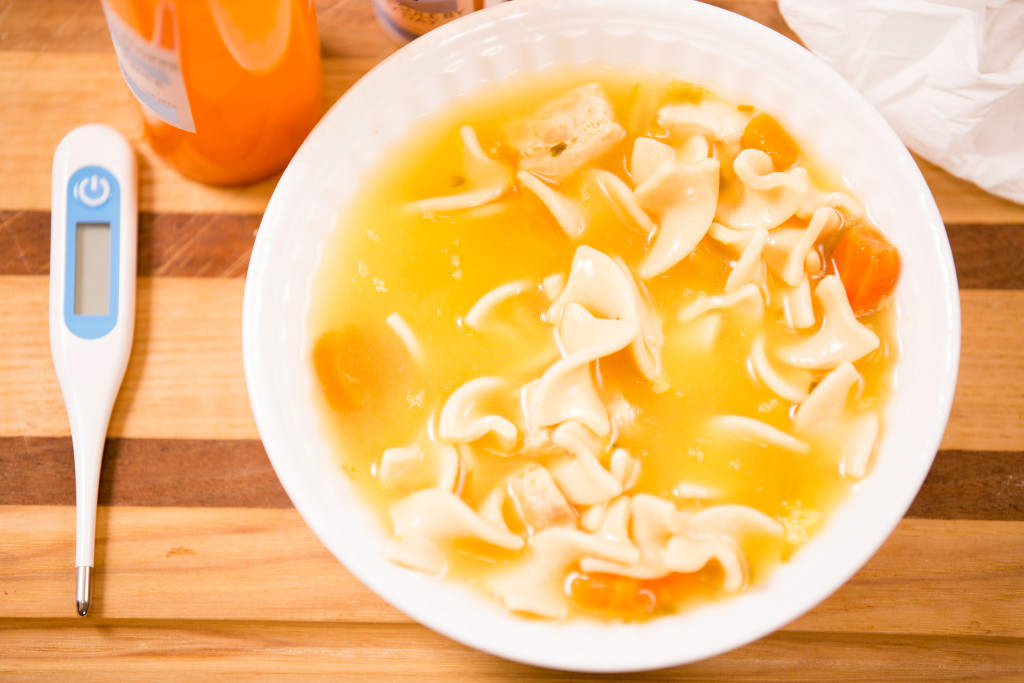 Sip plenty of clear fluids. When you are febrile in the throes of the flu, you tend to sweat and breathe with you mouth open, so you often lose a lot more fluid than you realize. Drink enough clear fluids (like water or tea) so that you’re urinating every few hours, and the urine isn’t dark and concentrated. And steep yourself in hot tea with honey. “Honey is a cure-all for so many things because of its antimicrobial and antioxidant properties,” said Glassman. “And it’s also good for coating a sore throat and helping you feel better.”

Use hot showers and vaporizers to decongest. Getting some steam won’t make you better any faster, but it can help you breathe more easily. “The steam helps you get rid of the mucous lining your airways, which can make it difficult and uncomfortable to breathe,” said Dr. Roach. “I tell people to get into a shower as hot as they can stand, and breathe the steam in and out as much as they can through their nasal passages.” Then cough, sneeze and blow your nose for 10 minutes after your sauna. And a humidifier can also soothe dry and cracked nasal passages. Plus, dry air helps the flu virus live longer, so aim to keep the humidity in your room at 30% to 50%.

Try working through it. “Every person with the flu on average infects another three people, and one of the people you infect might be somebody who could get in big trouble with it,” said Dr. Roach, including young children, the elderly, pregnant women and people with chronic health conditions. “Between 12,000 and 56,000 people die from the flu every year. So stay at home. Don’t go infecting those other three people. It will be better for you and a whole lot better for the rest of the world.”

Rely on homeopathic remedies. Don’t trust any over-the-counter remedy that promises to cure the flu itself, as opposed to treating symptoms. “These remedies have no active medications in them, and so they aren’t going to work beyond a placebo effect,” said Dr. Roach. “There are some herbal remedies out there that might be beneficial, but just haven’t been proven yet; but nonetheless, I’d recommend that people save their money and use proven treatments.”

This article was originally published in February 2018, and has been updated with new CDC data for winter 2019-2020.