That rocky start to October for investors doesn’t seem ready to ease up soon.

Investors have the jitters on Tuesday, as they keep a beady eye on developments ahead of this week’s U.S. -China trade talks and then another on an earnings season that’s just around the corner.

But now is not the time to run scared, says our call of the day from a nearly 50-year market veteran — Capital Wealth’s market strategist Jeffrey Saut — who has a knack for timing market pullbacks. In an interview with MarketWatch, he insists we are in a secular bull market and the stock rally is far from over.

What Saut is referring to is a rising or falling market trend, which can last from 5 to 25 years, but is peppered by smaller bear or bull markets, respectively. And most investors aren’t experienced enough to recognize either, he says.

“The point is, a secular bull markets last 15-plus years. You can run how long this thing should last, either from October of 2008 or March of 2009 or April of 2013. The point is there ought to be years left in this thing and no one believes it,” said Saut. He adds that anyone not retiring in at least the next three years stands to lose if they stop believing in this bull market.

Investors are “scared to death,” convinced by the media that a recession is coming and putting too much faith in soft data such as economic surveys, he argued. “If we’re going into a recession, why are the most economically sensitive stocks, mainly the semiconductor equipment stocks, holding up so much better than the S&P 500?” Saut asked.

Given the current interest-rate environment, he says his indicators point to a multiple of 19 times forward earnings for stocks, which would put the S&P 500 at around 3,200, nearly 9% above the index’s Monday close.

Saut has made prescient market calls in the past, predicting a “waterfall decline” for equities a month before the October 1987 crash. As for the here and now, Saut believes the S&P bottomed last week at 2,855. And then there’s his long-term investment model that “flipped positive on October 2008 and never turned negative and says we have years left in this thing.”

Read: The Elizabeth Warren stock-market correction will happen sooner than you think

Europe stocks SXXP, -0.88% are struggling, while Asia stocks rose, with China equities SHCOMP, +0.29%  barely up after a week-long break.

Our chart of the day, from Alliance Bernstein, makes the case for diversified investment styles. In a blog post, Sharon Fay and Christopher Hogbin, co-heads of equities at the firm, point to September, when value stocks started to outperform their growth counterpart in a rising market for the first time since 2016. Their chart shows how fast that move came, and how relying on one style may be risky: 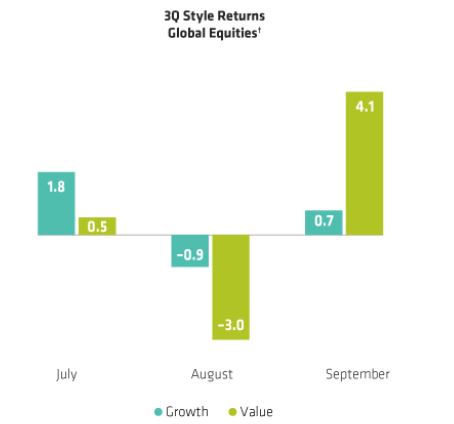 As a reminder, growth stocks are companies expected to see earnings and revenues rise more quickly than their industry peers, while value stocks are those believed to be undervalued in the market.

Putting a potential damper on those trade talks, the U.S. will blacklist a group of Chinese artificial intelligence companies it says are being used to repress the country’s Muslim minority groups.

As many as 40 state attorneys general intend to join a New York-led anticompetitive probe of Facebook FB, -0.43%, in yet another potential regulatory hurdle for the social company.

Read: As Netflix earnings nears, here comes an onslaught of competition — and content

FBI identifies the most prolific serial killer in U.S. history

Sen. Elizabeth Warren sticks to story that a pregnancy cost her a job

Beware of the ‘zombie deer’ spreading across the U.S.