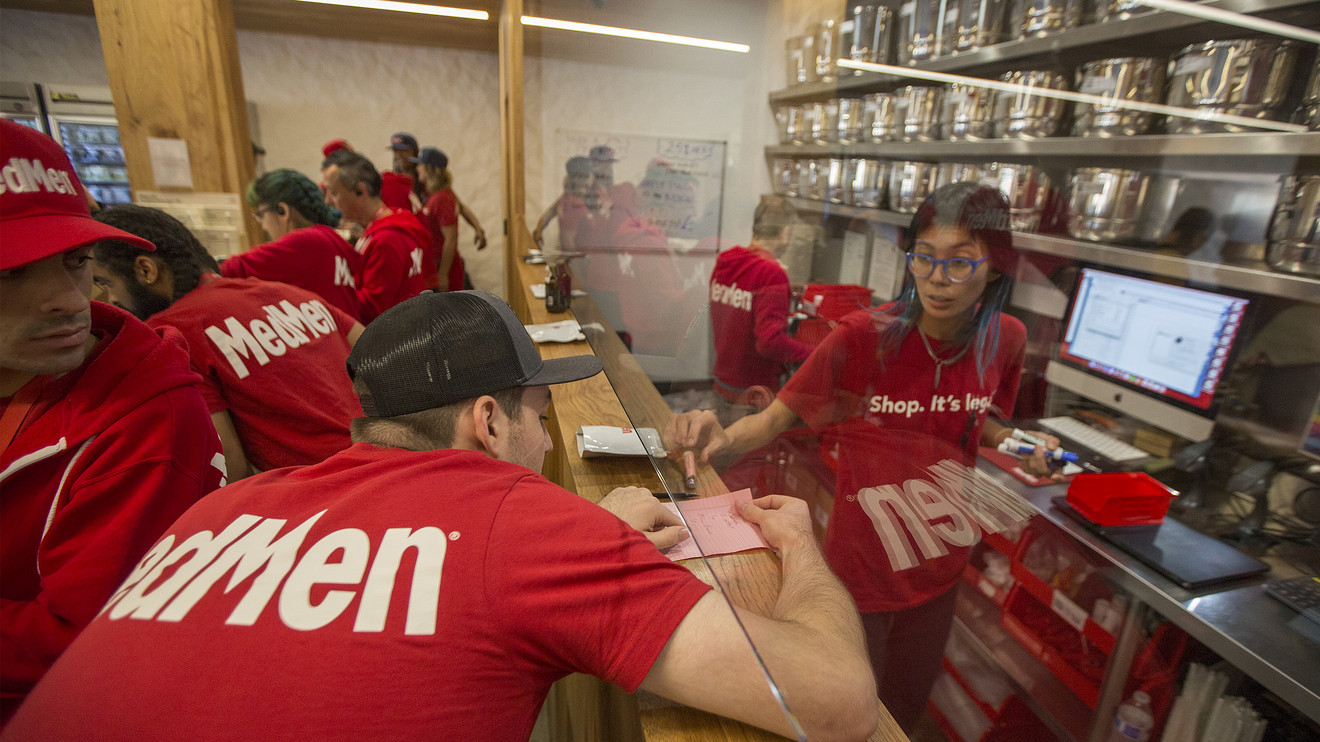 Cannabis stocks were lower Tuesday, weighed down by losses in the broader market after the U.S. blacklisted Chinese tech companies, with the collapse of a merger and ending of a supply agreement adding to the gloom.

The Dow Jones Industrial Average DJIA, -1.05%  was down more than 300 points in early trade as trade tensions between China and the U.S. continued to bubble up, with high-level trade talks between the two powers expected to resume on Oct. 10.

Late Monday, the U.S. blacklisted 28 Chinese companies because of their alleged role in human-rights violations against Muslim minorities ahead of the high-level discussions which will be led by China Vice Premier Liu He on Thursday. The S&P 500 SPX, -1.22%  was down 39 points, or 1.4%.

MedMen Enterprises’s stock MMNFF, -13.37%  slid 6%, after the company said it has terminated its deal to buy PharmaCann LLC. The retailer said a focus on leveraging its retail brand and on its California business would create more shareholder value than completing the acquisition, a stock deal valued at $682 million announced a year ago.

“The cannabis sector has evolved tremendously since we first announced the PharmaCann transaction and based on the current macro-environment and future opportunities that exist for our business, we believe it is now in the best interest of our shareholders to deepen, rather than widen, our company’s reach,” said MedMen Chief Executive Adam Bierman.

MedMen shares have fallen 68% in the last 12 months.

Aleafia Health stock ALEAF, -3.67% ALEF, -2.35%  slid 5.4% after the company said it has terminated its wholesale cannabis supply agreement with Aphria Inc. APHA, -1.95% APHA, -1.82%  after the latter failed to meet its obligations. The agreement, which dates back to Sept. 11, 2018, was between Aphria and Aleafia-subsidiary Emblem and required that Aphria would provide up to 175,000 kg equivalents of cannabis products over an initial five-year term.

Aphria shares fell 5% on the news. The company said it was disappointed by the move and that it had every intention of fulfilling the deal.

“As a large shareholder of Aleafia, Aphria made good faith efforts to ensure continuation of the Agreement understanding it was in the best interest of all parties involved,” said Aphria. It said the parties are contractually required to have 30 days to negotiate, once the termination notice has been received and that if they fail to reach an agreement or settlement, it will fight any effort to claim damages.

The lung-disease outbreak that has sickened more than 1,000 people and killed at least 18 across the U.S. and is understood to be related to vaping continues to unsettle cannabis investors, according to Alliance Global Partners. The firm said it recently hosted 25 companies from the cannabis and CBD sectors at a conference and that the health crisis dominated talks.

See: Vape sales are falling on fears about the outbreak of vaping-related lung illness

“While the root cause of these illnesses remains unknown—we believe evidence continues to point to the black market versus the legal market,” analyst Aaron Grey wrote in a note to clients. “ This has still led to an overall impact on the category as Headset data has shown that vape sales mix decreased in adult use markets, but has rebounded recently, which we believe may be an indication of consumers realizing products from the legal market are tested and safer.”

John Oram, president and chief executive of Oakland, Calif.-based NUG, agreed and called on industry insiders to coalesce around that message. The illness “is a big setback for legal cannabis,” he said, with tobacco companies pointing the finger at cannabis, because most of those sickened have said they used THC products.

See now: This woman in cannabis made an early bet on the sector that has paid off

Cannabis companies, meanwhile, are pointing the finger at big tobacco, “and it’s not productive,” said Oram. “This is an opportunity to show that it’s not our products that are causing the problem, but the illicit market, it’s an opportunity to call for stronger regulations, stronger enforcement and a different approach to how the legal business is rolling out,” he told MarketWatch.

On the regulatory side, more needs to be done to get licensing approvals and expand the number of dispensaries, so the legal market has the chance to grow. In California, the black market remains a major force, he said. The sector also needs enforcement action to shut down black-market players, but in a political environment that is focused on attaining social justice for those who suffered disproportionately during prohibition, district attorneys and attorneys general are reluctant to take any action that might be construed as re-establishing the war on drugs, he said.

“Now there’s a public health crisis that people are listening to is the time to get the message out there that people really need to go to regulated stores,” he said.

One challenge for the legal sector is the proliferation of counterfeit products, which are becoming increasingly sophisticated, said Oram. “There are products that look exactly like real brands and have packaging that makes them look completely compliant,” he said.

A recent NBC News report found that 15 THC products purchased on the black market contained pesticides and myclobutanil, a fungicide that can turn into hydrogen cyanide when burned. Three cartridges purchased in legal dispensaries were clean, the test found.

Sundial Growers SNDL, -4.87%  was down another 3.7%, a day after it became the subject of a class-action lawsuit in the U.S. for allegedly failing to disclose that a customer returned half a ton of cannabis because it contained mold and bits of rubber gloves.

The allegations were first reported by MarketWatch’s Max A. Cherney on Aug. 20, and MarketWatch’s reporting is cited in the suit.