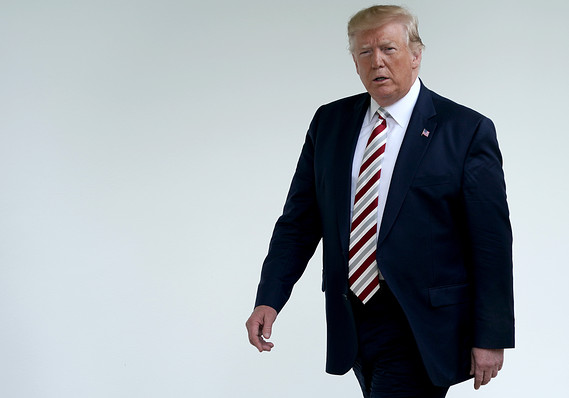 President Donald Trump on Monday threatened Turkey’s economy if the country takes what he called “off limits” actions, and blasted Democrats amid the latest development in the effort to obtain his tax returns.

After lawmakers from both parties criticized his decision to withdraw U.S. forces from northeastern Syria, Trump said on Twitter, “As I have stated strongly before, and just to reiterate, if Turkey does anything that I, in my great and unmatched wisdom, consider to be off limits, I will totally destroy and obliterate the Economy of Turkey (I’ve done before!).”

The order by Trump cleared the way for Turkey to launch an offensive against Kurdish fighters, as The Wall Street Journal reported. Among those critical of Trump’s decision was Sen. Lindsey Graham, a South Carolina Republican who is often aligned with the president. He called it a “disaster in the making” and “shortsighted.”

The Turkish lira TRYUSD, -0.1608% fell about 2.1% against the U.S. dollar on Monday. Trump in August 2018 sanctioned Turkey over the detention of an American pastor, causing the lira to slide to a record low at the time. The pastor was later released.

Trump got a reprieve Monday as a judge put on hold an order that his accounting firm must turn over eight years of his personal and business tax returns sought by Manhattan’s district attorney.

“The Radical Left Democrats have failed on all fronts, so now they are pushing local New York City and State Democrat prosecutors to go get President Trump,” he tweeted.

Early Monday, a federal judge rejected Trump’s claim to be immune from all criminal investigations and dismissed his lawsuit challenging a state grand jury subpoena for his tax returns sought by Manhattan District Attorney Cyrus R. Vance Jr., a Democrat.

As the Associated Press writes, Trump’s lawyers have said the investigation is politically motivated and the request for his tax records should be stopped because he is immune from any criminal probe as long as he is president.

Trump was scheduled to sign two trade agreements with Japan. Under one, the White House said Japan will eliminate or reduce tariffs on about $7.2 billion in U.S. agricultural exports. The other deals with commitments to opening markets in digital trade between the two countries. Trump has said the U.S. and Japan will continue to work toward a broader agreement.

At a White House event before the signing, Trump kept up his pressure on the Federal Reserve to cut interest rates, saying he wanted a “very substantial” reduction. Trump has pushed the Fed to aggressively cut rates, while Chairman Jerome Powell has maintained that the central bank does not act out of political considerations.

And with high-level U.S. and Chinese trade negotiations set to resume later this week, Trump said there was a “good possibility” of a deal with Beijing.