On Oct. 1, Massachusetts introduced a combined employer-employee tax of 0.75% of earnings, capped at the Social Security maximum of $132,900, to pay for a new program of family and medical leave. Specifically, beginning in 2021, employees in Massachusetts will be eligible for:

• Up to 12 weeks: to care for new child or if a family member is involved in a military deployment

• Up to 12 weeks: to care for a family member with a serious medical condition

• Up to 20 weeks: to replace earnings when a medical condition prevents work.

• Up to 26 weeks: to care for a military family member with a serious medical condition.

The payment is equal to:

• 80% of earnings equal to or less than 50% of the state average weekly wage; and

The maximum weekly benefit is $850 a week. This amount will be adjusted each year to keep pace with 64% of the state average weekly wage.

The program is financed by a payroll tax. That tax is split between a levy for family leave and for medical leave (see figure below). An employer with 25+ employees can have the employee pay 100% of the family leave amount and up to 40% of the medical leave amount. Thus, employees could pay as much as half the total tax (0.248 + 0.13= 0.378) and employers the other half. For businesses with fewer than 25 people, employers don’t have to contribute to the state fund at all, although their employees will still contribute. Any employer can request an exemption if they offer family or medical leave as generous as that provided under the new law, in which case neither the employer nor its employees pay the tax. 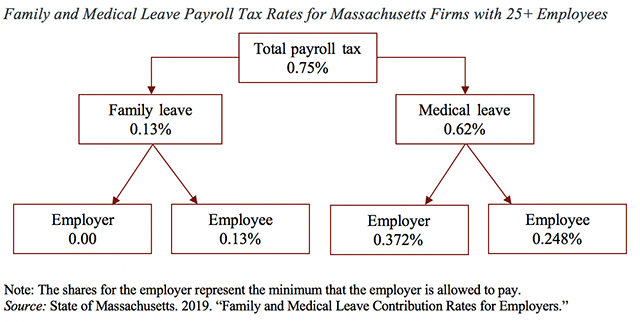 This law has caused me a lot consternation.

First, it has taken me by surprise. I fancy that I usually know what’s going on — at least in my own state. Second, I support the goal of the legislation that makes it easier for people — particularly women — to both work and take care of family. Third, I sniffed at alternative ways to pay for family and medical leave. For example, senators Rubio and Romney proposed allowing people to draw on future Social Security benefits to cover family needs when they are young. Fourth, I never considered the possibility that states would start using the Social Security payroll tax base for their programs. In fact, at this time, seven other states (California, Connecticut, New Jersey, New York, Oregon, Rhode Island, and Washington) have some form of family and medical leave program and they are all funded by a tax on payrolls.

So where do I come out? Progress is good. This legislation will definitely improve the quality of life for Massachusetts workers. At the same time, we do risk burdening workers if all social programs are funded by a regressive payroll tax. Thus, it seems even more important than ever to identify the costs of Social Security that should be borne by today’s workers and the portion attributable to giving away the trust fund to early generations that should be borne by taxpayers more generally.