Every time we look at households’ preparedness for retirement, we find that two-earner couples are in the worst shape.

We generally attribute their status to the fact that one-earner couples receive a Social Security spouse’s benefit equal to 50% of the breadwinner’s while most two-earner couples do not. A recent study, however, suggests another problem: two-earner couples often do not save enough through their 401(k) plans.

Since two-earner households generally earn more than one-earner households, they need more savings. But only about half of private sector workers have a workplace retirement plan at any given time, and people rarely save outside of such plans. As a result, only one person in many two-earner couples is actually saving. In this situation, the spouse with a plan should save more to make up for the non-saving spouse. But 401(k) plans are individual savings vehicles, and contribution decisions are often driven by plan design features like default contribution rates and employer matches, not household earnings.

This study uses data from the Survey of Income and Program Participation (SIPP) for 2009, 2011, and 2013 and focuses on married couples where at least one member ages 25-54 is contributing to a 401(k) or other defined-contribution plan. If the worker’s spouse has access to a defined-benefit plan, she is assumed to be saving for retirement automatically. The end result is that individuals in the sample are in one of three groups: 1) single-earner couples; 2) dual-earner couples where both members are saving; or 3) dual-earner couples with just one saver. This study focuses on the saving behavior of the third group relative to the other two.

The simple comparison of 401(k) contribution rates for individuals in the three groups shows that no matter what a saver’s spouse is doing the saver’s total contribution rate is typically 8% to 9% of his earnings (including employer contributions). In other words, these individual savers do not seem to realize that they need to pick up the slack if their spouse is working but not saving. Regression analysis essentially confirms this pattern.

The problem is that the failure of those with an earning, non-saving spouse to save more of their individual income means that the household ends up saving much less of its income (see figure below). Dual-earner couples with one saver have an average saving rate of only 4.9% of household earnings. The consequence is that households who should have a leg up saving for retirement — after all, they have two earners and access to a 401(k) — end up saving relatively little. 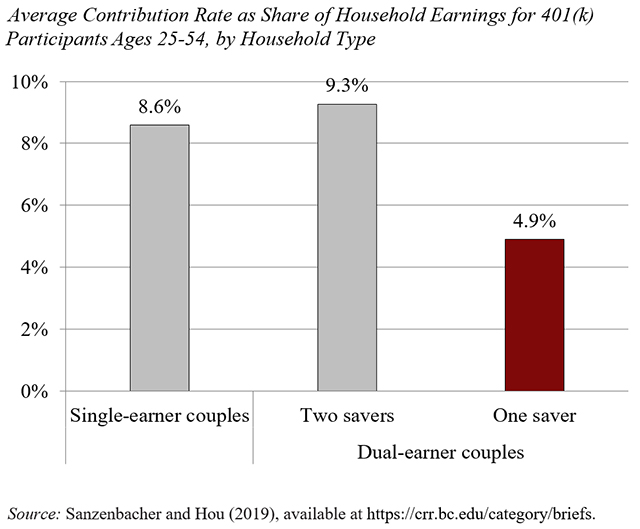 These findings suggest that 401(k) plan sponsors, at a minimum, could educate individuals with 401(k) plans to remember that, if they have a working spouse who is not saving, they themselves should be saving for two. Of course, this issue would be moot if everyone had access to a savings vehicle in the first place, so that all two-earner households could also be two-saver households.