During the first three trading sessions of October, the Dow Jones Industrial Average DJIA, +0.86%  declined 2.7% and the S&P 500 SPX, +0.90%  was down 2.2%. You may take these declines in stride — after all, the Dow has returned 12% this year, while the S&P 500 has returned 18% (total returns include reinvested dividends). But this strong showing masks what has really been a recovery from the dismal fourth quarter of 2018. 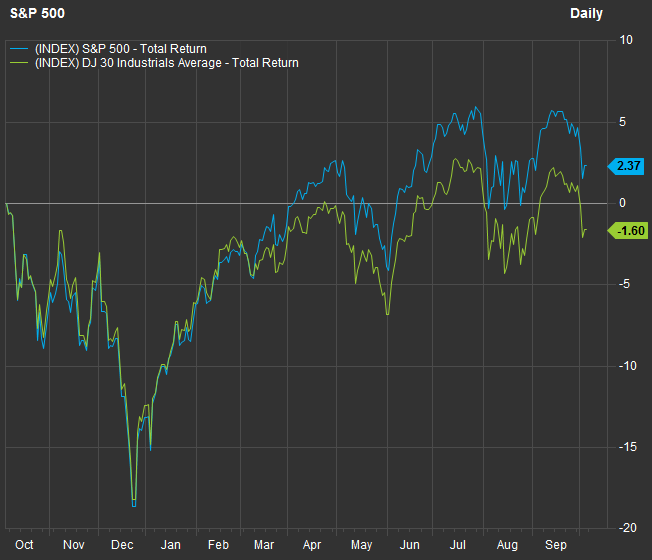 A 12-month chart gives a far different impression than the year-to-date gains for the benchmark indexes.

All this points to the utilities sector — the best performer in the S&P 500 over the past year. That may not be a surprise given the decline in interest rates, but the sector‘s performance over very long periods has been very good.

How tax-friendly is your state?

Conventional wisdom is that California is the worst state for taxes because it has the highest top income-tax rate. But that’s too simple, because the top rate only applies to the relatively small number of households with annual income of more than $1 million. A Kiplinger’s study that uses a model household that is neither rich nor poor rates the states for tax-friendliness. And by that method, California doesn’t crack the top 10 for tax-unfriendliness.

Catey Hill once again suggests retirement cities to fit a MarketWatch reader’s finances and interests. This time it’s a person who wishes to live on Social Security in a small city on the coast. What’s your advice?

Maybe FIRE is the wrong goal

Chris Mamula suggests achieving a net worth of zero as the first step toward financial independence.

Related: Why we ditched the FIRE movement and couldn’t be happier

What worries this Blackstone co-founder

Blackstone CEO Stephen Schwarzman names five things investors should be concerned about in an interview with MarketWatch’s Chris Matthews.

If you’re looking for “all-weather businesses” to invest in, read how this fund manager finds them.

Rex Nutting looks at the ups and downs of the U.S. economy since President Trump took office, and MarketWatch readers add hundreds of comments, not all of which are strictly partisan. Join the conversation.

Here’s a look at what economists have to say about Friday’s closely watched jobs report and what might be behind the slowdown in wage growth.

Drilling down, which cities have the fastest job growth? And where are wages rising the fastest?

A big tech company in a sweet spot

Cutting commissions and disrupting an industry

Charles Schwab’s SCHW, +1.28%  decision to eliminate most trading commissions on retail accounts was quickly followed by rivals TD Ameritrade AMTD, +1.29%  and E-Trade ETFC, +1.02%. Schwab said its move was timed to coincide with the release of a new book by the company’s founder. But it also comes amid a squeeze at its main profit center — interest income — which in turn led to 600 job cuts recently. This pressure on interest income is hitting all three companies, and their share prices have suffered accordingly over the past 12 months: 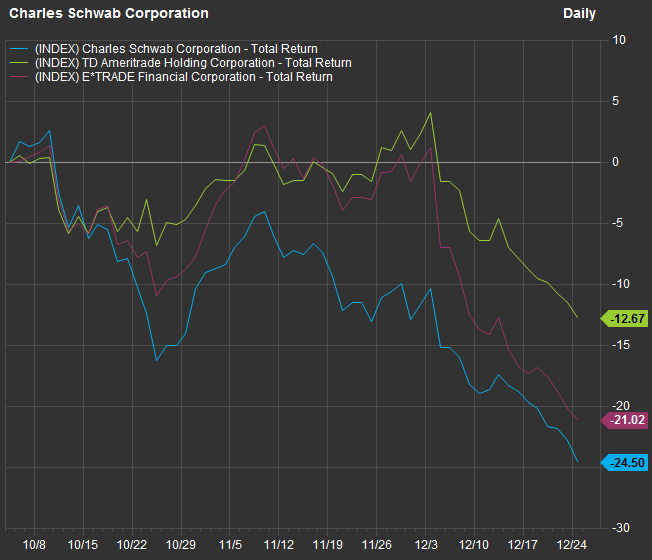 Discount brokers’ stocks have suffered as their interest income has been squeezed declining interest rates.

Besides the damage to the discount brokers, some investment advisers are concerned that cutting the commissions may not be such a good thing for individual investors. Dozens of MarketWatch readers disagree.

An industry still on the upswing

Despite some recent economic reports pointing to slower growth in the U.S., excellent numbers continue to come in for home builders.