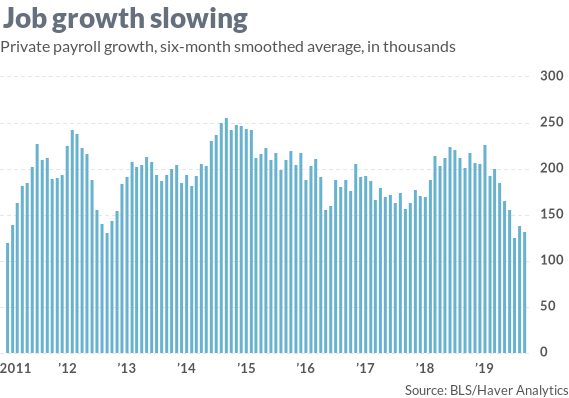 The U.S. economy isn’t creating as many jobs as it has been.

That’s the basic reaction to the jobs report, the capper to a week of news that was disappointing on the economy and disappointing, in the extreme, to anyone who retained any hope that President Donald Trump (or anyone around him) has a shred of integrity.

The economy added 136,000 new jobs in September, with the unemployment rate dipping to a 50-year low of 3.5%. But wages actually fell, manufacturing jobs shrank (a casualty of trade conflict and maybe some late-in-the-economic-cycle shrinkage), and retail fell off a cliff, cutting 11,400 positions, including 13,000 in clothing stores.

The gains were probably not in industries where you’d like them to be — indeed, some are, at a glance, hard to believe. And they are smaller than the 157,000 average monthly gain over the last six months.

“A 50-year low unemployment rate is nice, but wage gains are softening and that does not bode well for income growth or consumer spending,” Naroff Economic Advisors president Joel Naroff said after the report.

But the important news remains that the president and his administration committed so many felonies we’ve learned about this week and last that it’s plausible to examine whether the White House — the White House! — meets the elements of a Racketeer Influenced and Corrupt Organization Act prosecution.

Corruption is bad for economies, usually sooner rather than later. We see it already.

It’s a funny jobs report, riddled with head scratchers, many of them candidates for revision next month. Some of them include:

• The economy only added 114,000 private sector jobs, a distinctly weak performance. The other 22,000 were in government, with a small shrinkage in federal hiring and 24,000 new state and local hires.

• Wage growth turned negative, if only by a penny per hour. The 2.9% year-over-year wage gain was the weakest in a year. “A Fed cut in October is squarely in play given the weaker trend in job growth and limited inflationary pressure,” economists at Bank of America Merrill Lynch wrote.

Also read: One puzzle in the jobs report: a wage slowdown as unemployment rate falls to a near-50-year low

• According to the report, 10,000 new jobs in September were for school teachers. Yes, it’s September, but seasonal adjustments are supposed to correct for that effect. The notion that we’re suddenly spending more to hire more teachers isn’t backed up by much more evidence.

• More than new 13,000 jobs were in amusements, gambling and recreation? Don’t believe it, and a wave of casino hiring isn’t a great sign anyway. It’s also dubious that the half-million job “transit and ground transportation” industry added 10,500 jobs — unless Uber UBER, -1.01%   went on a hiring spree (Uber’s actually eyeing layoffs).

The most bullish economic news is that hiring in industries that depend on discretionary consumer spending is mostly strong. Restaurants added 1,500 workers, home-improvement contractors added nearly 4,000, and car dealers added almost 5,000, even as auto manufacturers cut back.

Investors who think consumers will prevent a 2020 recession got some ammunition.

As pure short-term economics, not a lot changed. The basic picture holds: Growth is slowing, manufacturing appears to be heading into a downturn, and more evidence points away from a 2020 recession than toward one.

The durability of consumers is pretty palpable right now. The warning sign on consumers is the wage number. If that pattern sustains, consumers will slow down spending.

Pull the camera back, and the jobs report isn’t close to the week’s most important news.

It’s Ukraine, stupid. And China. Maybe Italy and Australia, too.

Read in English, the edited memo of Trump’s phone call with Ukraine’s president is extortion, plain and simple. Texts between American diplomats that became public on Thursday also make clear that they, at least, believed that the president was conditioning military aid to help Ukraine resist Russian aggression on finding allegations, false or not, to make about former Vice President Joe Biden, a candidate to replace Trump. That’s illegal. On its face.

The same is true for the president’s public urging of China to investigate Biden and his son, who have not been accused of any crime, at a time when the U.S. and China are engaged in trade talks. There are also published reports that the president has leaned on Australia, and that Attorney General William Barr has been in Italy trying to dig up dirt on Biden.

The RICO Act labels as a corrupt enterprise any group or association that commits two or more criminal acts in a specified period of time. (A 2016 Justice Department manual explicitly includes government agencies). Extortion is specifically included. So is wire fraud, including, potentially, the text sent by Trump’s ambassador to the European Union (and million-dollar donor) telling other diplomats to stop talking about Ukraine via text, and asserting the president was not tying Ukraine aid to illegal campaign interference.

Lawyers will figure out impeachment later. The economic point is this:

The wobbliest part of the U.S. economy, manufacturing, is the one most affected by trade, the area where our corrupt president has the most leeway to act autonomously.

The markets’ biggest problem is that they don’t trust Trump. They wobble when he makes pronouncements about trade. Companies trim investment in capital spending, and slow hiring in manufacturing, because of their inability to predict what he’ll do next.