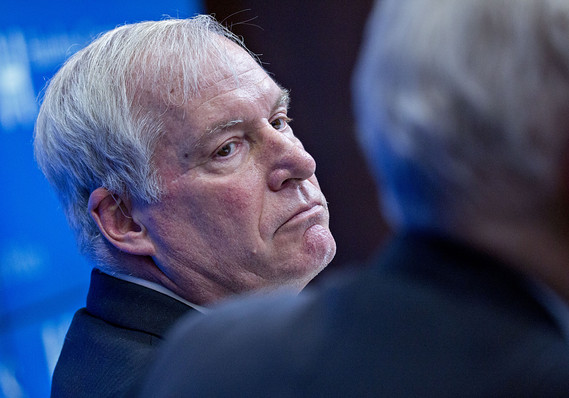 Some of the soft economic data that gave bullish investors agita earlier this week really shouldn’t have been such a surprise, said Boston Fed President Eric Rosengren on Friday.

“We know the tariffs are having an affect on the economy. We know that the manufacturing sector globally is being impacted by what’s happening with trade, so we would expect that exports and manufacturing would be weak and that’s exactly what we’ve seen,” Rosengren said, in an interview on CNBC.

Equity markets sold off sharply this weak after data from the Institute for Supply Management for September showed the weakest reading for manufacturing activity in about a decade, with a report from ISM on nonmanufacturing coming in at a three-year low.

The Boston Fed chief said the data are still consistent with the economy slowing only modestly, to around a 1.7% annual rate over the second half of the year.

It would be more concerning of the economy slowed much more than that, he added.

The September job report was consistent with an economy that could grow at a steady pace, Rosengren said. The big question remained whether it would weaken from here.

Other issues still up in the air are whether the factory weakness spills over to areas not directly affected by trade concerns and whether consumers remain confident to keep spending, he said.

Rosengren voted against the two Fed rate cuts this year. He has said he’s worried that pushing the economy with rate cuts would lead to different “pockets” of financial instability.

After weak ISM factory and service-sector reports, investors now see an 80% chance of a rate cut at the meeting on Oct. 29-30, according to the CME FedWatch tool.

Rosengren said he was open-minded about what he would advocate at the meeting. He said he would be focusing on data about consumers, he said.

Strong auto sales in September seemed to belie concerns about the consumer, he noted.

Rosengren said Fed interest-rate policy are below neutral and would foster growth in coming months.

“We’ve already had two easings. Easings don’t have their impact immediately,” he said.

Stocks jumped after the jobs report was released, as investors breathed a sign of relief the data wasn’t as bad as many had feared but wasn’t strong enough, perhaps, to dissuade the Fed from cutting rates at the end of this month. The Dow Jones Industrial Average DJIA, +1.07%  was up solidly points in afternoon trading.