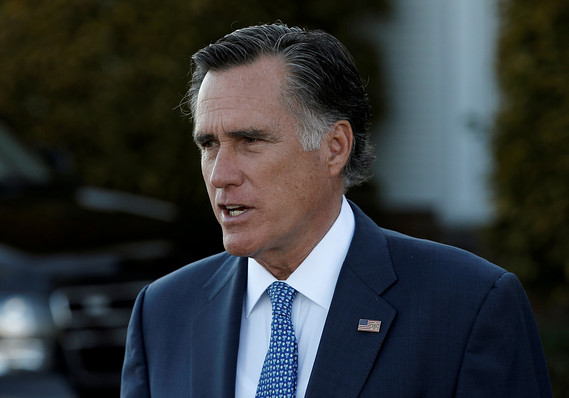 Mitt Romney speaks to the media after meeting with then-president-elect Donald Trump at Trump National Golf Club in Bedminster, N.J., on Nov. 19, 2016.

‘By all appearances, the President’s brazen and unprecedented appeal to China and to Ukraine to investigate Joe Biden is wrong and appalling.’

A day after Trump urged China and Ukraine to investigate former Vice President Joe Biden and his son, the Utah Republican said not only that Trump’s comments were “wrong and appalling” but that it “strains credulity to suggest that it is anything other than politically motivated.”

Trump has said he has done nothing wrong as Democrats move forward with impeachment proceedings. In appealing to China and Ukraine, Trump has said he is investigating corruption. The Bidens have rejected Trump’s allegations of wrongdoing related to those two countries.

Few Republicans have been critical of Trump as the impeachment inquiry unfolds. Besides Romney, Sen. Ben Sasse of Nebraska has said “Americans don’t look to Chinese commies for the truth,” and Rep. Adam Kinzinger of Illinois has blasted Trump for quoting a Fox News contributor who warned of civil war over the president’s possible impeachment.

Trump and Romney have had a bumpy relationship. Romney called Trump a “fraud” during Trump’s presidential campaign, but later met with him as he was considering prospective cabinet nominees.

In his statement, Romney didn’t go so far as to mention impeachment.

U.S. stocks SPX, +1.07% were higher Friday after the government reported the jobless rate fell to a 50-year low as the economy added 136,000 jobs in September.