It seems as if Congress has a committee for everything, even though it doesn’t accomplish all that much these days.

There might be grounds for optimism, however. This year Congress set up a panel that’s focusing on how to knock the institution itself back into shape.

In hearings that have unfolded during the current impeachment drama and months before it began, the House Select Committee on the Modernization of Congress has tackled a wide range of topics, including stopping a staff brain drain, increasing civility and collaboration, and improving the budget process.

The country’s founders aimed to establish Congress as the strongest branch of government, but it has been the weakest for at least a decade because it’s no longer independent, said former Virginia Republican Rep. Tom Davis in a recent interview. “The president’s party is basically an appendage of the executive branch, and the minority party no longer views itself as a minority shareholder. Instead, they’re the opposition party,” he said.

“You’re not going to restore that overnight without changes in behavior by the members and in the party structure. But one thing you can do is at least increase their knowledge base,” he added. Davis testified in May before the modernizing panel, calling for raising salary caps for staffers for Congressional committees, as well as for more funding for the Congressional Research Service and the Government Accountability Office, key legislative branch agencies that serve as an in-house think tank and in-house auditor, respectively.

The 2017 tax-reform law, according to its critics, is a prime example of a measure that was shaped too much by lobbyists rather than by the diminished legislative branch, with provisions that favored brewers, citrus growers and other special interests. Legislation this year that aims to revamp the U.S. retirement system has drawn similar flak, with detractors saying insurers that provide annuities are having their way with it.

Rep. Derek Kilmer, a Democrat from the state of Washington who chairs the modernizing committee, said his experience at consulting giant McKinsey & Co. came up in discussions before he became the panel’s chairman, though mostly he just has long expressed interest in having Congress function better.

“When I was at McKinsey, I only had one or two instances where I got to work on a turnaround project,” he said in a recent interview. “This is one of the more significant turnaround projects that I’ve ever been assigned.”

One idea that has come up repeatedly at the modernizing panel’s hearings has been raising the pay for staff in order to attract and retain experienced aides and advisers. Republican and Democratic proponents argue that higher compensation for Capitol Hill staffers, along with other improvements, would help make Congress more effective and better equipped to stand up to lobbyists and executive-branch officials, who tend to have greater experience and bigger salaries.

The median salary for House and Senate office staffers is $52,722 and has stayed at around that level for about a decade, according to nominal figures from research firm LegiStorm. That’s as annual pay for lobbyists in Washington, D.C., averages around $124,000, per Salary.com data, and the Securities and Exchange Commission, a top-paying arm of the executive branch, has an average salary of about $185,000.

“The differential is just too high. It’s affecting policy,” Davis said, regarding the disparities in pay. The former GOP congressman now works at law and lobbying firm Holland & Knight and is part of a ReFormers Caucus at Issue One, a nonpartisan nonprofit that aims to reduce the role of big money in politics.

An effort to raise the pay of members of Congress flopped in June, as some lawmakers feared that upping their own compensation would provide fodder for attack ads at re-election time that would resonate with voters. Davis believes voters would be more willing to accept pay raises for Hill staff. He sees a 25% chance of success for such a vote once the 2020 election is over.

Betsy Wright Hawkings, a consultant who previously worked for 25 years as a chief of staff for Republican lawmakers, said she was able to pay an experienced legislative assistant around $60,000 a year in 2008, when she was in a chief role. “It wasn’t going to make him wealthy, but it was enough to keep him,” she said in a recent interview. “He is now a chief of staff on the Hill — he has made it his career — because we were able to pay him enough to keep him on board.” After budget cuts, she was only able to pay a similarly capable legislative assistant about $40,000 a year in 2014, and that staffer eventually left to work as an industry lobbyist.

A salary of $40K is “more than a lot of people make, but not a lot in Washington, D.C. — and not enough to keep someone who has broad experience and knows his way around the Hill, when he could go downtown and make two or three times that lobbying,” said Hawkings, who is a senior strategic adviser at Issue One and managing partner at consulting firm Article One Advisors. “There are a lot of other stories that I could tell you, but that’s sort of the epitome.”

But she also stressed that giving raises to Hill staff hasn’t been and shouldn’t be the modernizing committee’s first order of business.

On Sept. 26, as much of Washington focused on the impeachment inquiry into President Donald Trump, the modernizing committee actually held a hearing on “opportunities for increased civility and collaboration in Congress.”

“In my scholarly view, Congress is a victim of a cancerous phenomenon, much more than it is a willful participant in discord,” said Jennifer Victor, a political science professor at Virginia’s George Mason University, as she testified about partisan polarization at the hearing. Her suggestions for fighting polarization included developing an internal Facebook-like FB, +0.68% platform for facilitating interactions among Republicans and Democrats, as well as shaking up seating arrangements on the House floor and encouraging participation in bipartisan caucuses.

Former Illinois Republican Rep. Ray LaHood testified at the Sept. 26 hearing in favor of holding a bipartisan retreat for lawmakers and their families, like one that he helped run in the 1990s.

“It’s pretty hard to trash somebody on the other side when you know their spouse or you know their kids,” said LaHood, who also was the Obama administration’s transportation secretary and now works for law and lobbying firm DLA Piper. 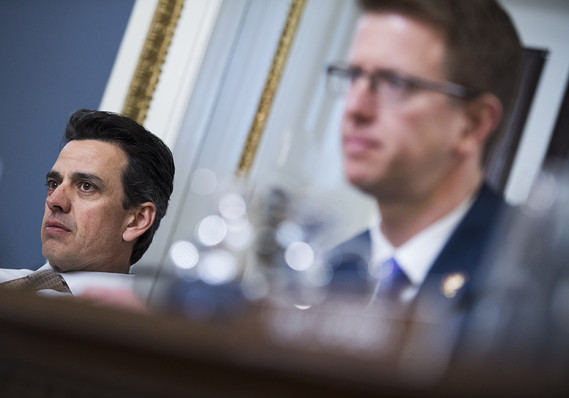 Democratic Rep. Derek Kilmer (on right) and Republican Rep. Tom Graves (on left) take part in a meeting of the Select Committee on the Modernization of Congress.

The modernizing panel last month also started talking about improving the budget and appropriations process. Last year, another congressional committee mostly struck out in its efforts in this area, so Kilmer’s panel held a hearing that featured testimony from leaders of that earlier body as well as other experts.

“The congressional budget process is dead,” said Bill Hoagland, a senior vice president at the Bipartisan Policy Center, during the hearing, which took place Sept. 19. “Over the last 12 years, Congress failed to adopt eight times — two-thirds of the time — a budget-resolution blueprint for the upcoming fiscal year.”

Hoagland, a former Hill staffer, said he’s among those who support switching to a two-year budget cycle. He told the committee: “If you want to find consensus on reasonable, doable reforms to the budget and appropriation process, biennial budgeting should be given serious consideration.”

Related: This past winter’s government shutdown was the longest on record by a wide margin

And see: Senate passes spending bill that delays possibility of another government shutdown

So far, the modernization committee’s six Republicans and six Democrats voted unanimously in favor of nearly 30 recommendations, with some related to a new human resources hub, technology revamps and transparency. The committee didn’t recommend raises for staff, but it did support regularly surveying employees on improving pay and benefits.

The dozen lawmakers are “trying to start with non-controversial wins,” and there are political challenges to raising staff pay thanks to “so much negative talk about how Congress is wasteful,” said Lee Drutman, a senior fellow at New America, a center-left think tank, in a recent interview.

“Every one of these recommendations” is aimed at “improving things for the American people,” said Kilmer, the Democratic congressman who chairs the modernizing committee. “We’re not looking at staff retention just for the purpose of looking at staff retention. We’re looking at it because in the absence of solving for that, you’ve seen an eroded ability of Congress to solve problems on behalf of the American people.”

The committee, by design, may offer only recommendations to the House. Still, the goal is actual change, and the group has “built support for each and every idea” among other lawmakers, said Georgia Republican Rep. Tom Graves, the committee’s vice chairman, in a recent interview.