Home
Stocks
Mark Hulbert: Will the market crash if Trump is impeached, as he has predicted?
Prev Article Next Article

How worried should you be about the investment implications of the recent impeachment proceedings?

Not surprisingly, opinions vary widely, often along partisan political lines. A year ago, you may recall, President Trump famously predicted that the stock market would crash if he were impeached. Other commentators dismissed that prediction as an idle threat.

Fortunately, however, we don’t need to rely on political partisans to gauge the likely impact of impeachment. We can let the markets tell us, courtesy of the online gambling sites that allow investors to bet on various outcomes such as impeachment. By correlating changes in the price of the Trump impeachment contract at such sites and the S&P 500 SPX, +0.37%, we can determine the likely impact on the stock market if Trump were impeached.

I conducted precisely this exercise for purposes of this column, focusing on the price history over the last year of the PredictIt.org contract based on the question “Will Donald Trump be impeached in his first term?” (See accompanying chart.) I then measured the correlation between its changes over the trailing day and week with comparable changes for the S&P 500. 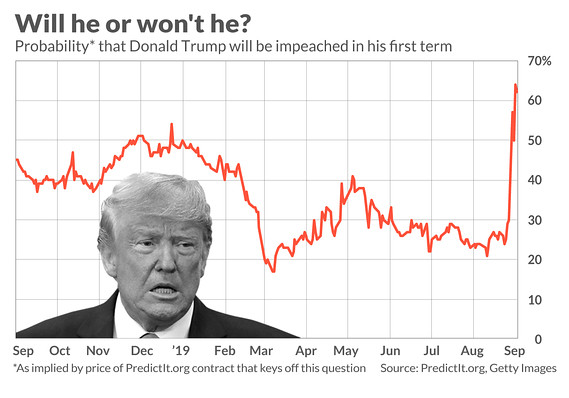 (To give full credit for the methodology I used, I followed the lead of a groundbreaking 2003 study by Eric Zitzewitz, now an economics professor at Dartmouth College, and Justin Wolfers, now a professor of economics and public policy at the University of Michigan.)

I failed to find any significant correlation. Consider a statistic known as the “r-squared,” which reflects the degree to which one data series (in this case, changes in the price of the PredictIt.org Impeachment contract) predicts or explains something else (in this case, the S&P 500’s change). I failed to find r-squareds above 1% — which is to say that increases or decreases in the probabilities of Trump being impeached couldn’t even explain 1% of stock market gyrations.

I concede that you may find this result surprising. After all, the stock market suffered mightily in 1974 and 1998 when Presidents Nixon and Clinton were impeached. Why not this time around?

My answer is twofold. First, we don’t need to know the answer to this “why” question, since the market (via the collective memory of millions of investors) is well aware of the stock market’s swoon on those two prior occasions. For whatever reasons, they don’t see the current impeachment proceedings having a similar impact

My second answer to this “why” question: There were plenty of other things besides impeachment in 1974 and 1998 that can more than account for the stock market’s poor performance on those occasions. As Robert Stovall, Chief Investment Strategist at CFRA, reminds us: Prior to Nixon’s impeachment, “the U.S. stock market was already in a bear market, triggered by the OPEC oil embargo.” And the blame for the stock market’s plunge on the occasion of Clinton’s 1998 impeachment goes “to the global debt crisis and the near collapse of the Long Term Capital Management hedge fund.”

It’s worth making a broader point as well: Noneconomic events rarely have a big or sustained impact on the stock market. I make this bold assertion based on a study which, despite being several decades old, remains perhaps the standard academic work on this subject. It appeared in the Journal of Portfolio Management in 1989, written by economics professors David Cutler, Lawrence Summers, and James Poterba (Poterba is at MIT; Cutler and Summers are at Harvard).

The researchers designed their study in order to give noneconomic news every chance of showing that it has a big impact on equities. To do that, they gathered all entries in the “Chronology of Important World Events” from the World Almanac for the period beginning with Pearl Harbor and ending with the market crash of 1987. The professors eliminated from their list any events that the New York Times didn’t carry as a lead story and that the Times’ business section didn’t report as having affected investors.

Given these criteria, you’d certainly guess that they would have had a big impact on the markets. But that’s not what the researchers found. On the contrary, they found that the S&P 500’s absolute return on the days these events hit the market was quite small—just 1.46%, which is less than 1 percentage point more than the 0.56% that prevailed on all other days.

The professors’ conclusion: There’s “a surprisingly small effect of noneconomic news” on the stock market.

The bottom line? Resist the urge you may otherwise feel to make changes to your retirement portfolio based on political developments such as the impeachment inquiry.