The stock market has a supply and demand problem, with corporate share sales surging to a 4 1/2-year high at the same time corporate buying has dropped.

Overall new corporate share offerings, which include follow-on, convertible and initial public offerings, soared to $48.6 billion for the month, the most in a month since March 2015, according to TrimTabs Investment research data.

“New offerings skyrocketed in September, suggesting U.S. companies are trying to take advantage of lofty market average before there is a more dramatic slowdown in the equity markets or the economy,” TrimTabs said in a research report to clients.

The report comes as the Dow Jones Industrial Average DJIA, -1.86%  rose in mid-September to within a fraction of its record close reached in July, before pulling back through month end. On Wednesday, the Dow tumbled 494 points, or 1.9%, after slumping 344 points on Tuesday on the heels of data showing a second-straight month of contraction in the manufacturing sector. 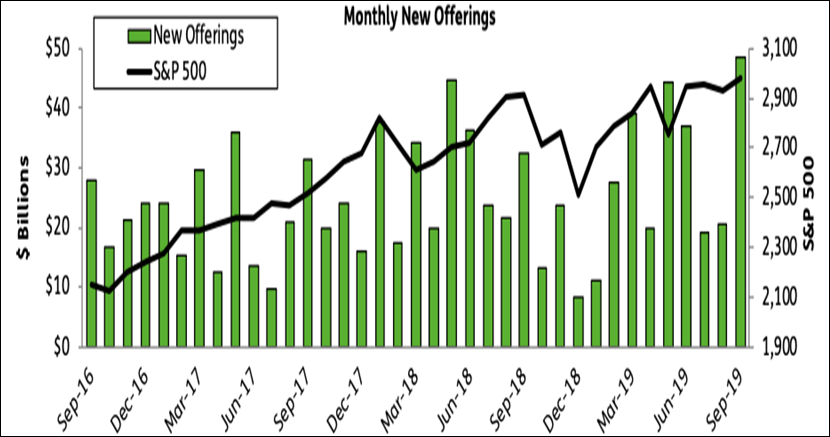 Corporate executives were also big sellers, as insiders unloaded $14.2 billion worth of their companies’ stock last month through Sept. 26, according to a TrimTabs analysis of Form 4 filings with the Securities and Exchange Commission. That’s the highest of any September in the past 10 years.

September also marked the sixth month this year that insider selling has topped $10 billion, which is already the most months to cross above that 8-figure threshold in a year since 2006, TrimTabs said.

Meanwhile, overall corporate demand for shares, in the form of stock buybacks and cash mergers and acquisitions, has dropped over the past few months.

“U.S. companies committed very little cash to shrink the float in the third quarter,” TrimTabs said. “While there are seasonal factors that influence this, there has also been some softening in economic data, and the threat of a global slowdown to cash a shadow over future business conditions.”

Overall corporate buying of over $188 billion was the second-lowest quarterly total in the past five years.