The largest public pension funds have over $1 trillion in aggregate unfunded liabilities. Low interest rates are going to make it harder for these and other pension plans to rely on investment returns alone to meet their obligations to retirees.

Interest rates in the U.S. TMUBMUSD10Y, +1.06%   have been declining for over 20 years, and short-term rates have been hovering close to zero over the last decade. Negative interest rates in Japan and Europe and mounting expectations of rate cuts by the Federal Reserve have expanded the pool of bonds with negative yields to more than $16 trillion, or around 27% of the global bond market.

Initially, low interest rates are good for asset prices. Simplistically, this is because investors seeking similar returns as before are now forced to take capital that they would have otherwise invested in safe government bonds and deploy it into riskier assets (equities, high yield bonds, etc.), thereby driving up prices of these assets. In addition to stronger economic growth coming out of the 2008 financial crisis, this is one of the factors leading to strong performance of equities SPX, +1.42%   over the past decade.

However, going forward it is unlikely that asset returns are going to be similar to what we witnessed over the last decade. One of the reasons is that risky asset returns are generally priced as a spread over risk-free real returns (i.e. inflation-adjusted returns). This makes intuitive sense, as investors would demand additional return for taking on risk.

If the risk-free rate is low, and there is high demand for risky assets, then the total investment return (risk free rate + risk premia/spread) will likely be lower than in a scenario with higher interest rates, all else being equal.

Source: Voya Investment Management 2018 Capital Markets Forecasts. There is no guarantee that the indexes will perform as forecasted. 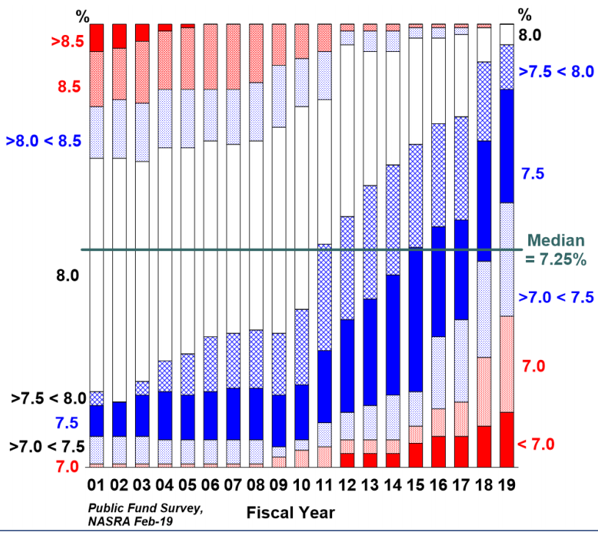 With lower interest rates, it is getting harder to meet expected return targets without taking on more risk. For example, in 1995 a 7.5% expected return came with 6% of standard deviation (a measure of risk). In 2015, generating the same return required taking almost three times the amount of risk (17%), according to investment consultant Callan Associates.

Achieving a 7.5% return when interest rates are low to negative is riskier than achieving the same return in a higher-rate environment. For example, if risk-free interest rates are at 5.5%, then a pension plan needs to take only enough risk to generate an additional 2% in return. However, if the risk-free rate falls to 2%, then a pension plan needs to take significantly more risk in order to generate the additional 5.5%. Taken to the extreme, if interest rates were to go to zero, then the entire 7.5% would be subject to risk. 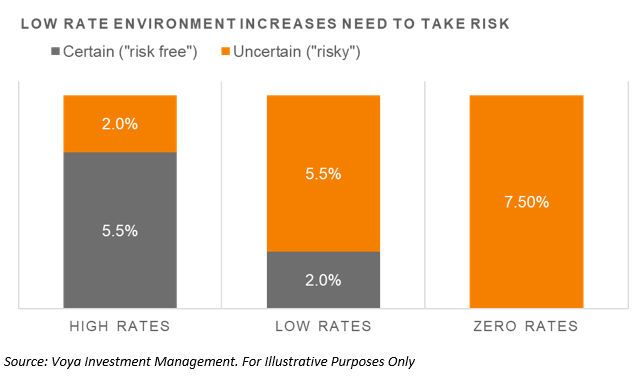 Stated differently, there is less certainty of achieving higher expected returns in a low interest-rate environment. Which brings us to the critical point: Pension plans cannot rely on certainty of investment returns alone to bridge the gap between pension assets and liabilities.

What can be done?

There are only three ways for a pension plan to meet its pension obligations. 1) Generate investment returns, 2) increase contributions, or 3) amend the benefit structure / risk sharing. Recognizing the true level of pension underfunding and risks is critical in deciding how to share the burden between these three avenues.

Public pension plans are underfunded — with an average funded status of 72.1% across the 100 largest public pension plans, according to the 2018 Public Pension Fund Report by actuarial consulting firm Milliman. While the funded status has marginally improved from about 71% in 2014, the dollar value of underfunding has increased from approximately $1.13 trillion to about $1.14 trillion in that time.

Additionally, Milliman found a widening gap between reported discount rates and independently determined rates. Milliman estimates that a 1% increase or decrease in discount rate assumptions (e.g. from 7% to 6%) can result in decreasing or increasing liabilities by between 8-15%.

Using Milliman’s estimates, reducing the reported discount rate to the independently determined rate increases the funding gap by $370 billion for the 100 largest public plans. This is material. If interest rates and expected returns continue to decline, the gap will only increase. 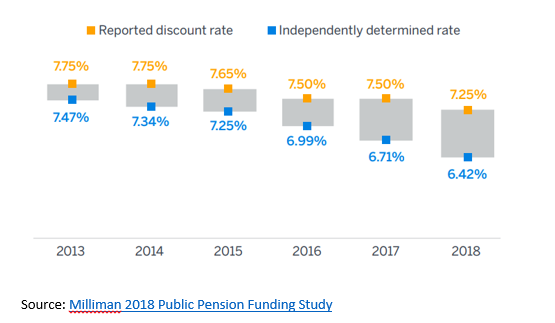 Some states have recognized the issue and are actively seeking solutions. On Feb. 18, New Mexico Governor Michelle Lujan Grisham signed an executive order calling for the establishment of a 19-member Solvency Task Force to provide recommendations to address the Public Employees Retirement Association’s $6.0 billion unfunded liability by Aug. 30.

Chief investment officers are doing what they can to increase returns while balancing risks, but there are limits to returns they can safely generate in a low interest-rate environment.

Therefore, pension boards and governments need to look beyond investment returns and begin having some tough conversations around increasing contributions or amending benefit structures.

The other alternative is to kick the can down the road, and hope that higher returns materialize and the problem goes away. This may have worked in the past, but if a low rate environment persists, hope may not have enough runway.